Hopefully you have gotten all of your Thanksgiving shopping done by now. If not, you can build your list based on some of my favorite foods/recipes below, and if you already have, maybe you can make a couple of alterations to normal recipes to make them slightly healthier than in years past. Regardless, I hope you had or have a less stressful shopping experience than I did today! Mark my word, I will never do Thanksgiving grocery shopping the Sunday before again!
Below are some recipes of my own and others I have found on blogs or Pinterest in years past or recently. I have many more ideas for appetizers, side dishes and desserts listed on my Pinterest page if you are still looking for a new and exciting addition to your traditional holiday spread.
Appetizers:
This year we will be spending Thanksgiving with Tim’s family at my sister in law’s, north of Boston. Since we can’t get there until early Thursday, I will be contributing as much as possible by prepping ahead! Wednesday I am going to make both my spicy sweet potato hummus and maple chia candied pecans and walnuts. They will be great for snacking throughout the day while everyone is preparing food in the kitchen!

Sweet Potato Hummus                 Maple Chia Candied Nuts
The rest of the family decided to make bacon wrapped blue cheese filled dates for an appetizer too, which Tim and I won’t be having. As an alternative, I decided I will make pistachio stuffed dates that I had pinned on Pinterest a long time ago and never got to trying. I hope they turn out great! {update: they are amazing. I’ll been making them for the 3rd year now in 2016}
The Bird
While I follow a plant based diet most of the time all year long, I do still eat pasture raised organic eggs regularly and will have some turkey on Thanksgiving! I am very particular though and recommend everyone to purchase a pasture raised or free range bird, preferably local. By now, most of the local birds have probably been claimed at the farmers markets, farms, or small local markets, but Whole Foods still had a wide variety of brands and sizes when I stopped in today. Plus, many were already brined! Localharvest.org can help you find a local farm for future holidays.
Why choose pasture raised? It isn’t just lack of hormones, antibiotics, and fillers. It means that you are supporting a healthier and more humane way of life for poultry, as well as a better environment. Every purchase we make counts towards the type of world we will have in the future. On top of that, you are supporting smaller family run farms that are likely not owned by a larger food corporation making more money than the farmers themselves. Finally, an added bonus is that animals raised in this way taste better. I am not just saying this because I support organic and sustainable practices. The flavor of the meat is fuller and when cooked properly also is more tender. This could mean you’ll be more satisfied from a smaller amount of the meat, reducing your chances of overeating, and then having more leftovers! 🙂
Delicious Side Dishes
My mother in law will be making her german potato stuffing that she has been making my husband’s whole life. Making stuffing from scratch is a treat to begin with over the bagged stuff Americans are accustomed to, but adding some potatoes makes it even better! She will also be making some whole grain bread, cornbread, and cranberry relish.
Don’t go forgetting your veggies though! We will also be having green beans with shallots and almonds, peas, and my contribution will be my Maple Roasted Butternut Squash, Brussels & Cranberries that I have been making for a few years now. It is a hit with my family all fall long, not just on this holiday of thanks!

While I won’t be making it this year due to the cranberry relish that we will have, I highly recommend this homemade pineapple cranberry sauce recipe I found a few years back at wellnessmama.com. I usually make it on Thanksgiving but also for other occasions. It doesn’t use any granulated sugar but is still delicious and balances the tart with sweet by adding pineapple juice, a little maple syrup, and elevates the flavor further with orange zest. {update: I’ve perfected no sugar added cranberry sauce}
If we didn’t already have so many delicious recipes, I would be making these Rosemary Garlic Hasslebeck Potatoes (vegan, gluten free, paleo) for sure!
Desserts
My mother-in-law will be making her pecan pie, and my sisters-in-law found a great recipe for a maple sweetened slow cooker apple crisp. I can’t wait for both! Here is a baked apple crisp recipe I tried earlier in the fall that is gluten free and vegan if you’re looking for a lightened up version. I used double the cinnamon listed, and for the crisp part, used 1/2 cup quick oats, 1/2 cup almond flour, 1/4 cup coconut flour, 3 T maple, 3 T coconut oil, 1/4 C coconut sugar, 1/8 tsp salt, 1 tablespoon cinnamon, and 1/2 cup chopped walnuts. Follow all of the directions they list though and it will turn out great!
I will also be making some peanut butter ginger cookies ahead of time that are from the dessert blogger, Chocolate Covered Katie. Both times I made them I used coconut sugar for the sugar and the stevia part of the ingredients. For the flour, once I used whole wheat pastry and the other time used oat flour. Both worked well! I use frontier brand ginger and enjoy life brand allergen free chocolate chips (1/4 cup) since both times I made these I was bringing them to events. The first was a nutrition talk for parents and the second was to the holiday health challenge kick off I am helping to run at work. Everyone loved them!
While we won’t be making them for Thanksgiving, I have made these Pumpkin apple muffins by Minimalist Baker several times this season already, including for the nutrition talk and holiday health challenge kick off mentioned above. They were a hit both times even though they aren’t super sweet. I have used applesauce instead of canola oil each time I have made them. You can make them into mini-muffins easily by cutting the baking time in half too!
Sustainably Harvested Wines 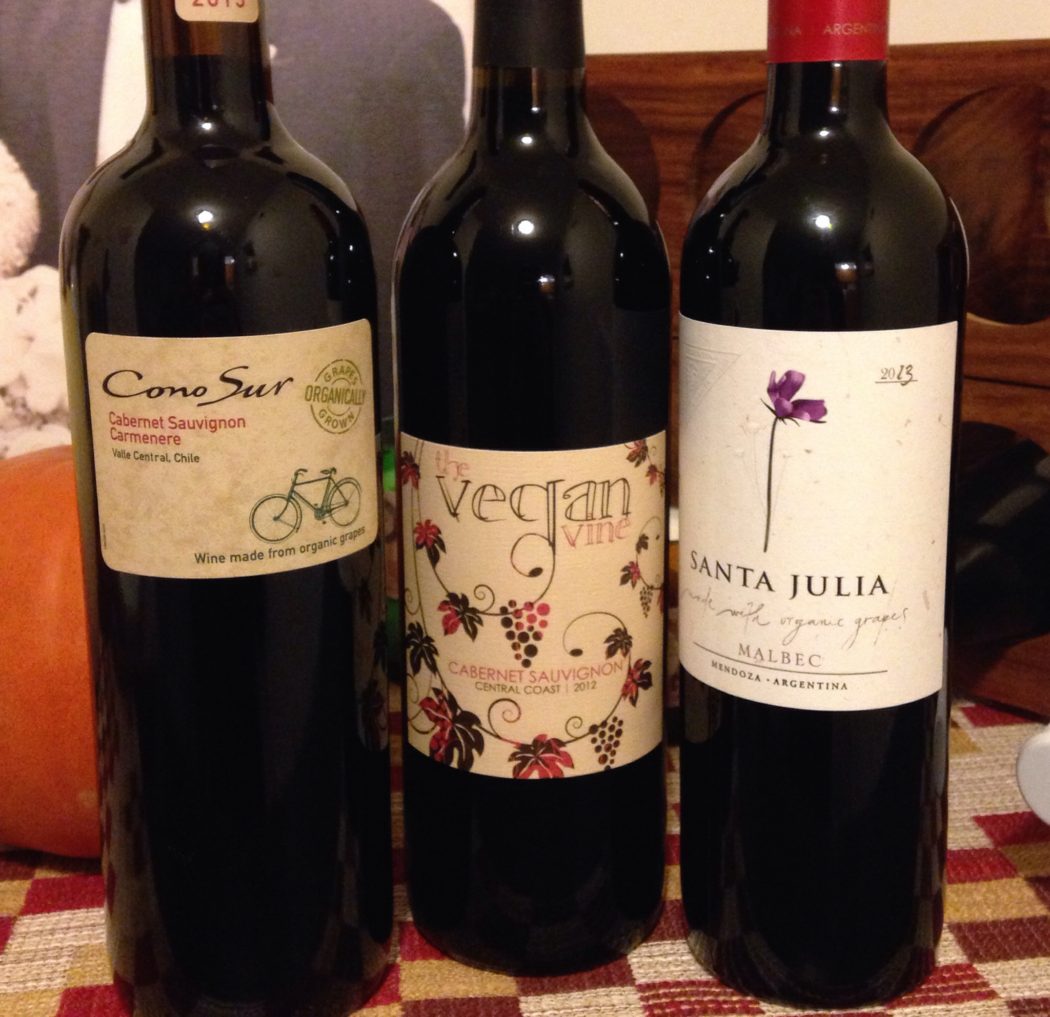 We recently found the brand Vegan Vine at our local liquor store in the sustainable wine section. Tim proclaimed the Cabernet Sauvignon we picked up as his favorite wine ever. While I could describe the wine as rich, fruity, and delicious, I am not as much of a wine expert as I would like to think and instead of pretending to review it, will just give you the description of tasting notes: Aromas of bright berry fruits. Plums, tobacco and a subtle floral note. Full and rich flavors of blueberries, blackberries and dried cherries. Dried plums and a little anise spice round off the wonderfully smooth finish. Moderate tannins. You can learn a lot more about their sustainable practices and see their other wines at theveganvine.com.
The “Cono Sur” Malbec above was also good but almost too smooth. I would recommend it to anyone new to wine and think it would have been perfect when Tim started to drink wine instead of beer! The “Santa Julia” malbec above was really good too, more sweet with a slightly tart taste as well.
Again, I am not an expert here and while wine is my beverage of choice for a special meal, I only like red wines and cannot give the best food pairing advice!