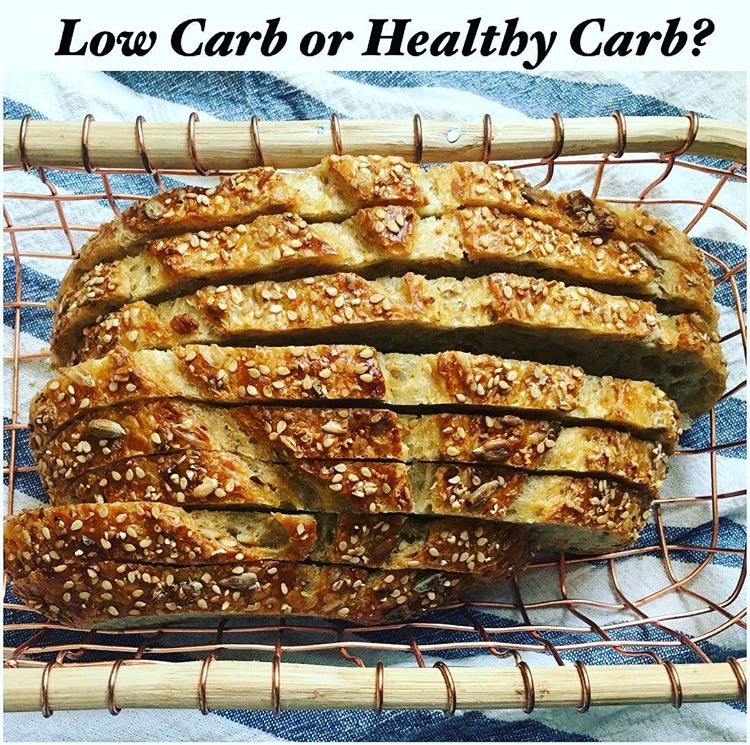 In recent months, I have realized despite my social media posts and how I educate in seminars and nutrition classes, some of my friends, family, and co-workers still assume dietitians “don’t eat carbs” and have diets labeled “low-carb”, or “gluten-free”. First, if I were to put a label on my diet, it would be “plant-based”. Do you know where carbohydrates come from? Plants (and the lactose in dairy). Your veggies, fruits, nuts, seeds, beans, lentils, and whole grains are all primarily carbs. My diet, therefore, has a lot of carbs, especially since grains paired with legumes are often my protein source in a meal.

Now let’s talk about what you think of when you hear “carbs”. You’re thinking bread, pasta, pizza, right? Well, I eat those things too. When you hear “gluten” you probably think of bread and pasta or the perception that a gluten-free version of them is healthier. Or, you may think a gluten-free cookie is straight-up healthy but a regular cookie isn’t. Not so much. First, a cookie is a cookie, people. It can fit into a healthy diet pattern. Unless you have celiac disease, or a diagnosed gluten-intolerance though, don’t buy the gluten-free processed food fad. They are usually packed with extra ingredients to gel the flour together without the gluten to try and mimic the texture of the original product. They also use flours lower in fiber and protein so you won’t be as satisfied from eating them and may be more likely to overeat, whether on those cookies, or later in the day. If you actually need to be gluten free, eat potatoes, corn, quinoa, millet, amaranth and oats instead of those products.

I’ll be sharing posts on pasta, pizza and bread in the next few weeks but, here I am going to start with my {terrible} experience on a low-carb diet. I am half Italian with a good amount of Irish descent and know that pasta will always be able to fit into my diet and enjoy potatoes on the regular. As a nutrition student though, after gaining a few too many pounds my freshman year and before I was actually educated in nutrition, I tried the low-carb thing. I came home in May and for at 2+ months was doing two a day workouts to try to lose that weight and because I was unhappy with my swimming performance that year. In that time, I was keeping carbs as low as possible (think Atkins 20-40 gram per day intro phase). Did I lose weight? Yes. Was I happy? No. Knowing what I know now, it was probably the following that caused my weight loss, not necessarily all of the carbohydrate restriction because in most cases, calorie restriction and exercise will result in weight loss:

Despite what you and I have read of other’s testimonials on these diets, I was miserable. I never hit that point of waking up with a huge burst of energy after 5 or 7 days like people try to claim. That’s probably because I knew what real energy felt like while eating healthy so even when my body “adapted” it knew I could feel better. I was more often  hitting points of wanting to binge on every carbohydrate I encountered. I also was riding on the “willpower” train for a while and so, never “let” that binge happen. I did let my dissatisfaction with my performance and my body takeover my life, but did a great job hiding it from everyone else. I was consumed with counting every gram, having artificial sweeteners to keep carbs down even though deep down I knew they weren’t good for my health, and fit in some form of exercise (even just crunches) every time I ate a meal. I also required 10 hours of sleep a night because my energy levels were so low, did not spend much time with my friends to avoid “bad” food experiences, and therefore was much less social {hello early path to anorexia’s diagnostic criteria}. I hate the word “willpower” now. I have extreme empathy for those that trade a meal with friends for egg whites and veggies at home followed by a long nap. I cringe at the thought of so many people weighing every bit of food to count every gram of every macronutrient and thinking that they are being “flexible” with their diet. I stand for positive self-talk, building up those around you – who are likely thinking a lot of the same negative things about themselves as you are about yourself – and monitoring portions without being obsessive.
So, how did I get out of this toxic physical and mental state? It wasn’t overnight. But, it occurred when my food guilt hit an all-time high. After 2+ months I was having such bad heartburn and stomach pain from the lack of carbohydrate that I would have a piece of whole grain bread or half of a flatbread lavash here or there to soak up some stomach acid and get some relief. I would feel guilty about eating the carbs, and after my body had a little bit, it was thinking “That is what I prefer to fuel off of! Give me more of those!”. Still, I honestly thought I was bingeing after having a few bites of leftover pizza in my parents fridge with a piece of fruit and felt so bad about myself after. I remember coming really close to making myself throw up but then decided I would just go to bed with the guilt and exercise more the next day to “make up for it”. I would wake up the morning after these experiences (maybe 8-10 times total) and realize how unhealthy I was being but my mental battle kept me striving for the lifestyle I’d been leading for the majority of the summer. Each time though, I would allow myself a little more carbohydrate that day because 1) I had lost the weight I wanted to 2) I felt more energetic with them and 3) had better digestion with them. Once I realized I wasn’t gaining weight by adding them back, I let my diet slowly get back to “normal”. I still didn’t nail hitting the quantity of carbohydrate I needed in the diet of a collegiate swimmer until my senior year after a good amount of sports nutrition and exercise physiology education, but wow did I feel a lot better and enjoy life a lot more by not being so restrictive! {Especially with breakfast being my favorite meal – see below!}

Now, I know I could have lost the fat I gained over the duration of the summer by training the same amount I had and gradually altering my diet. Cutting out the alcohol was a healthy decision, but my motives for it weren’t so much. I could have done that and then chosen to include more home cooked meals and less cooking fats. I would have had much more energy to support my training and likely would have come back to college in the fall even stronger and more energetic than I had. My fall training likely would have been of higher quality too, leading me to improve even more that year than I had. I also would have enjoyed my summer a lot more with my friends and my family and, would have had a much less stressful and healthier relationship with food.
Here is a little more science on carbs so you stop believing that “they make you fat” (side note, no one IS fat, we all just have fat). Out of the 3 essential energy nutrients (carbs, fat, protein) and energy rich alcohol, carbs are the only thing you can store as themselves rather than immediately converting them to fat! This storage form of carbs is something called glycogen. We put the carbs in our liver as glycogen as a reserve to keep blood sugar levels normal when we sleeping at night, go too long without a meal, or are sick. We put other carb reserves as glycogen in our muscles as the quickest source of energy for movement. The more active you are, the more you’ll store (and use) this way. It’s only once those stores are full, or if you eat too much of the refined carbs in one instance sans fiber and protein, that you’ll start to store carbs as fat. Eat too many calories from protein at dinner? You’re storing that extra protein as fat right away (no you don’t just pee it all out). I feel so fortunate that with all the media and social media pressure and miscommunication, I had chosen a career where after his experience I had 3 more years of undergrad and 2 more of graduate education to transform my ideas of this nutrient.
I used to be embarrassed and keep quiet about these experiences – to say I had binges and thoughts of purging due to extreme food guilt seemed like something a dietitian shouldn’t have gone through. Now that I see so many eating disorders and counsel many females and female athletes on body image, I realize how important it is to be transparent. It helps other athletes {and non-athletes} realize they aren’t alone when they consider or succumb to the media and society’s ideas of what their body and diet should be. I hope it also helps any readers out there realize that you can overcome these mental battles as well as eat and enjoy what is best for you as an individual.
I really am proud that my education and experiences have allowed me to better respect my body, grow to enjoy a wide variety of foods, and positively influence others. Don’t love to include tons of healthy carbs in your diet and would rather have foods higher in fat? Go for it so long as you maintain a healthy weight and include plenty of veggies, fruits, and adequate sources of fiber such as beans, seeds and nuts. Also, get your blood work done each year to test your lipid panel. I’ve seen quite a few clients come to me because despite not missing sweets, grains and potatoes, they’d have their weight go down and their cholesterol and triglycerides go up. Not good! The Science of Nutrition by Thompson Manore and Vaughn defines a “healthful body weight” as one that is:

If you eat a real food diet, that is adequate in micro- and macro-nutrients, moderate with all foods, balanced in food groups, varied and flexible, and can say the above for your weight, keep doing you. Don’t worry about what the Today Show or Dr. Oz said or what your friend is trying to sell you on Facebook. Eat {mostly} Real. Enjoy Food. Live Well. If you’re struggling, don’t do it on your own. Find a local psychologist or registered dietitian specializing in sports nutrition or eating disorders and be proud that you’re strong enough to get some help!

As mentioned above, posts went live the next 4 Thursdays on the following:

Let’s promote some body positivity – share what carbohydrate you enjoy the most or how you’re able to ignore the media’s pressure!

Check back tomorrow for a FriYay giveaway – here’s a hint!
Save
Save