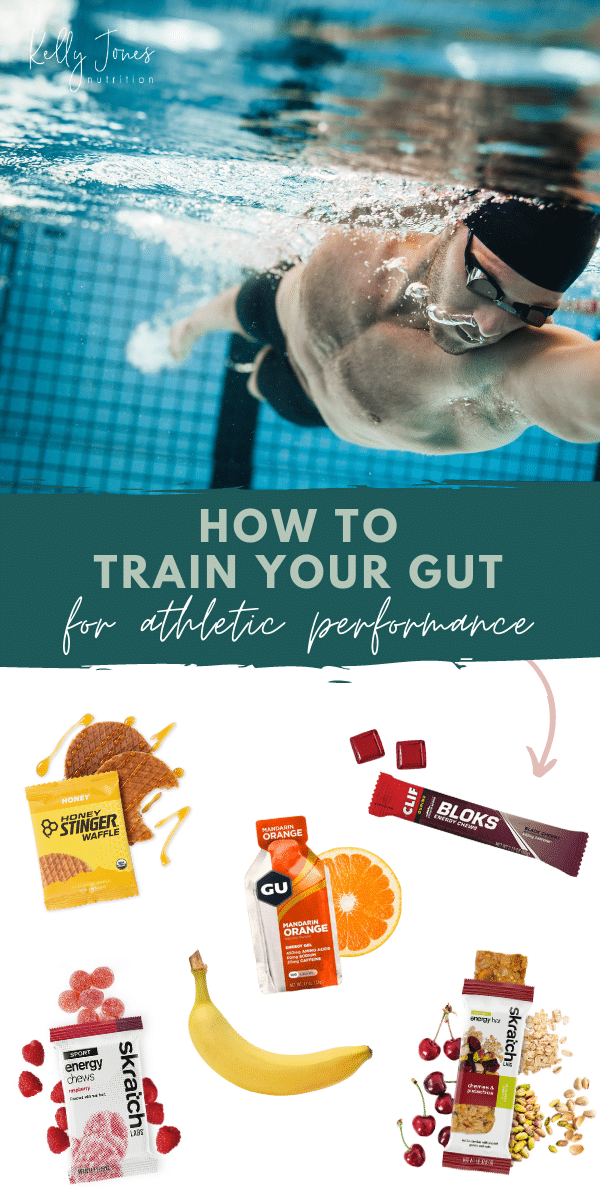 The last post in my gastrointestinal (GI) nutrition series for athletes focused on Irritable Bowel Syndrome (IBS), a chronic digestive disorder, and how to prevent the symptoms it causes from interfering with your athletic goals. But what if your GI discomfort is specifically induced by exercise?

The development of GI symptoms during endurance exercise is extremely common, affecting around 30-50% of athletes. In this post, I’ll explain the physiological reasons for GI symptoms during exercise as well as strategies for avoiding them. Since fueling during exercise can exacerbate GI problems for some individuals, a key focus of this post will be on how to train your gut to better tolerate fuel.

What Causes GI Issues During Exercise?

High-intensity exercise, especially in endurance athletes, has been linked to increased GI symptoms such as cramping, diarrhea, nausea, and vomiting. There is no clear answer as to what causes GI symptoms during exercise, but many factors may be at play, including:

Unfortunately, there’s a bit of a paradox here; while underfueling and dehydration can contribute to GI symptoms in athletes, GI symptoms may be exacerbated by taking in fuel and fluids during exercise, particularly if it’s something that isn’t part of your normal routine. KJN dietitians often have athletes say they never fuel during long runs, for example, because the one or few times they did, they experienced cramping or other symptoms. So, how can you stay fueled to support performance and GI function? By learning to train your gut!

What Does It Mean To “Train Your Gut”?

Fueling during endurance exercise tends to be closely intertwined with the GI symptoms commonly experienced by runners and other athletes. However, it’s also necessary for optimal energy levels and performance. Decades of research in sports nutrition show intake of carbohydrates during exercise is important to maintain intensity and delay time to exhaustion. For example, one specific study of competitive endurance races found that carbohydrate consumption during the race was correlated with faster finish times. Many studies like this highlight the importance of fueling during training and competition to enhance performance.

Interestingly, the same study linked above found that despite an association with faster race times, the athletes who took in carbohydrates during the event experienced more nausea. It goes without saying that nausea during a race is unpleasant, undesirable, and may impact athletic performance. So how can we stay fueled in a race or training session without triggering GI symptoms?

The answer lies in practicing your fueling. New research indicates that your gut can be “trained” to take in fluid and fuel during exercise without triggering GI distress. A study found that athletes who were accustomed to taking in fluids and fuel during exercise were half as likely to experience GI problems, and numerous other studies suggest that practicing nutrition strategies can improve tolerance of them

If you have had negative experiences with fueling during exercise, you are not alone! But don’t let a handful of bad experiences stop you from continuing to take in the fuel your body needs to perform at its highest level. As the research above shows, your body is highly adaptable, and by practicing over time you will likely be able to improve your carbohydrate tolerance during workouts. That’s why it’s crucial to consider nutrition a key component of your training so that you can stay fueled without GI issues holding you back.

How To Train Your Gut: Examples

The Academy of Nutrition & Dietetics position paper on nutrition for athletic performance recommends 30-60g carbohydrate per hour of endurance exercise and up to 90g per hour during ultra-endurance activities lasting more than 2.5-3 hours. Additionally, having a carbohydrate-rich pre-workout snack in advance is important for optimal energy levels. Here are some examples of what it might look like to train your gut to meet those recommendations. 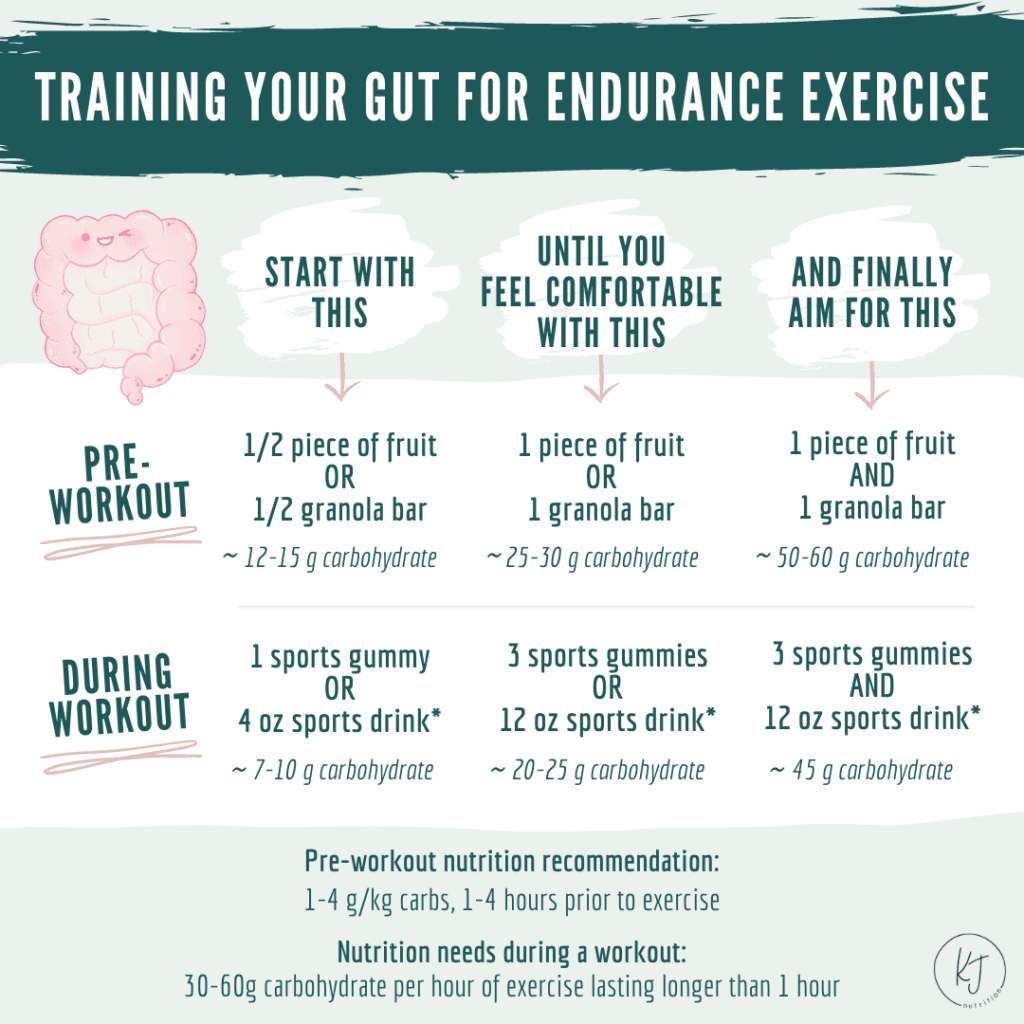 Example 1: During a workout: Energy chews

Start with 1-2 energy chews (such as Honey Stinger Chews, PROBAR Bolt Energy Chews, or CLIF BLOKS Energy Chews) per hour of exercise. Once this is well tolerated, try half a pack of chews per hour and gradually increase to a full pack per hour, which will provide sufficient grams of carbohydrate for most endurance athletes. The grams of carbohydrate provided from CLIF BLOKS are listed in the example below, but this could be extended to any brand of sports gummies. Also, any time you are consuming sports gummies, be sure to drink plenty of water with them!

Example 2: During a workout: Sports drink

Start with ½ scoop of sports drink mix (such as Skratch, CLIF, or Gatorade powder) diluted in water and gradually increase the concentration. Purchasing sports drinks in powder form will enable you to create a more diluted solution, which may be better tolerated and will also help ensure that you’re meeting your overall fluid needs as you work on scaling up carbohydrate intake. For most sports drink brands, approximately 1 ½ – 2 ½ scoops of drink mix per hour will provide the 30-60 grams of carbohydrates that are recommended per hour for endurance athletes.

You can also use a similar strategy to train your gut to tolerate pre-workout fuel. For example, start with half a piece of fruit or half of a granola bar 1-2 hours before your workout and once that feels good, work your way up to eating the whole thing and eventually, both!

Aside from training your gut, there are other strategies you can use to avoid exercise-induced GI symptoms. Here are a few other tips for supporting healthy digestion during exercise.

Avoid meals and snacks that are high in fat, fiber, or protein directly before a training session or race. These are important nutrients to consume throughout the day but may irritate the gut if consumed in large amounts directly before exercise. Especially if you are prone to GI symptoms, it’s best to focus on fueling with predominantly simple carbohydrates immediately before exercise and then make sure to get in plenty of protein, fiber, and fat throughout the rest of the day.

When you take in carbohydrates during exercise, make sure you are taking in enough water with them to support digestion. Highly concentrated carbohydrate solutions may aggravate GI symptoms, so if you are using a sports drink powder, try spreading it out in multiple bottles to make sure your fluid intake is sufficient. A good indicator of whether you’re adequately hydrated after a workout is the color of your pee!

Research suggests that nonsteroidal anti-inflammatory drugs (NSAIDs) such as ibruprohen and acetaminophen may increase gastrointestinal permeability and lead to GI symptoms, so avoid mixing NSAIDs such as and exercise if you can.

Ingesting a mix of simple carbohydrate sources is another tool for optimizing digestion and absorption. Different carbohydrates rely on different transporters in the small intestine, which can be maxed out at high intake levels. Consuming mixed carbohydrates, such as a blend of glucose and fructose, prevents any single transporter from maxing out and can therefore reduce the likelihood of GI distress. Additionally, there is some evidence that consuming multiple carbohydrate sources may have performance benefits, particularly for exercise lasting more than 2.5 hours.

Most sports nutrition products are formulated to contain multiple sources of carbs. For example, Skratch drink mix contains cane sugar (also known as sucrose) as well as dextrose (which is chemically identical to glucose), and Honey Stinger energy chews contain a blend of glucose, fructose, maltose and sucrose. If you have persistent GI issues with exercise, consider working with a sports RD to find the optimal blend of carbohydrate sources for you.