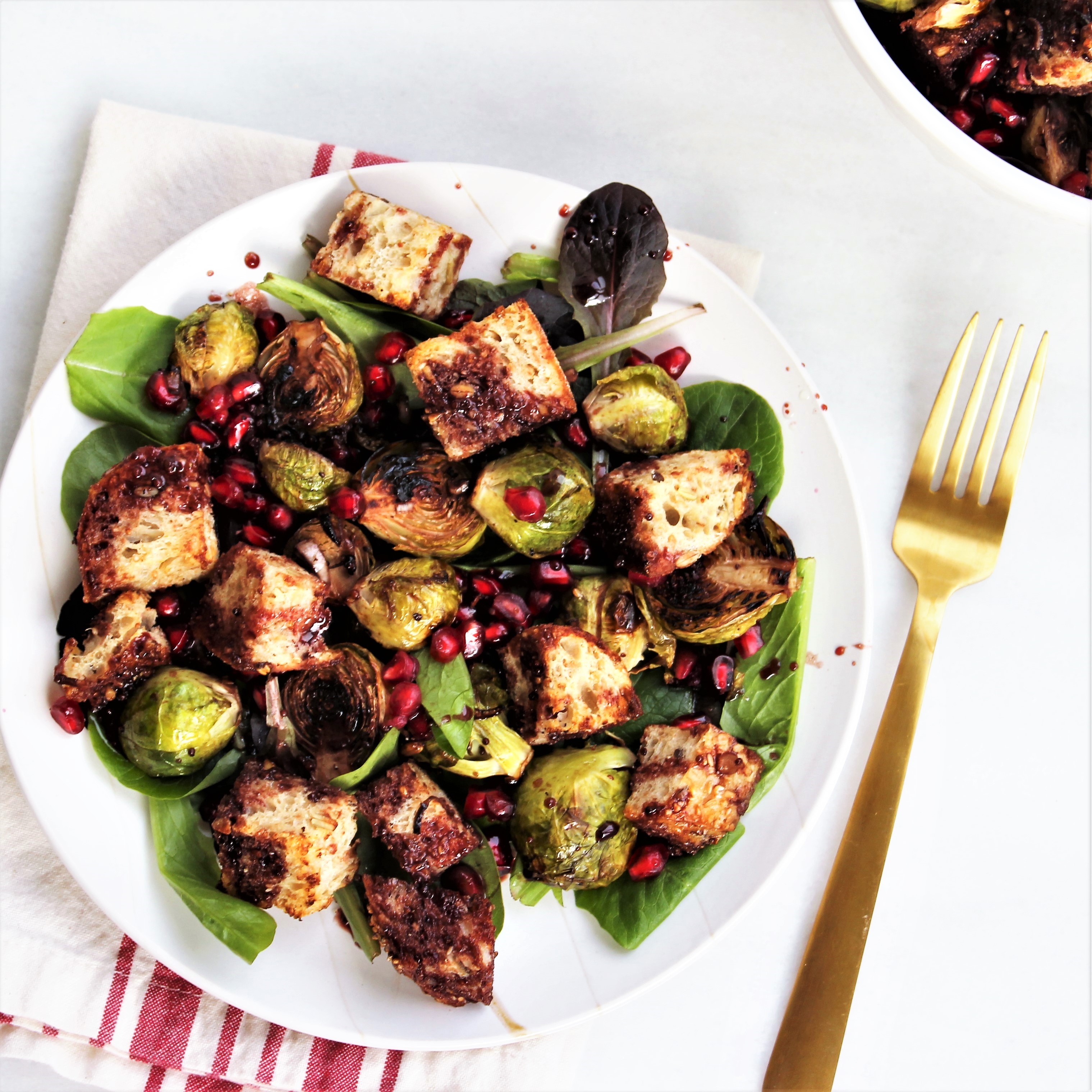 I’m a big pomegranate fan over here, but if you aren’t on board yet, this is the pomegranate recipe you’ve been waiting for. And if you’ve never had a panzanella salad before, you’ve been missing out. Still unsure of what it is? It’s basically a bread salad. What could be better? Adding brussels sprouts and a bit of natural sweetness can! This warm pomegranate panzanella salad has it all. 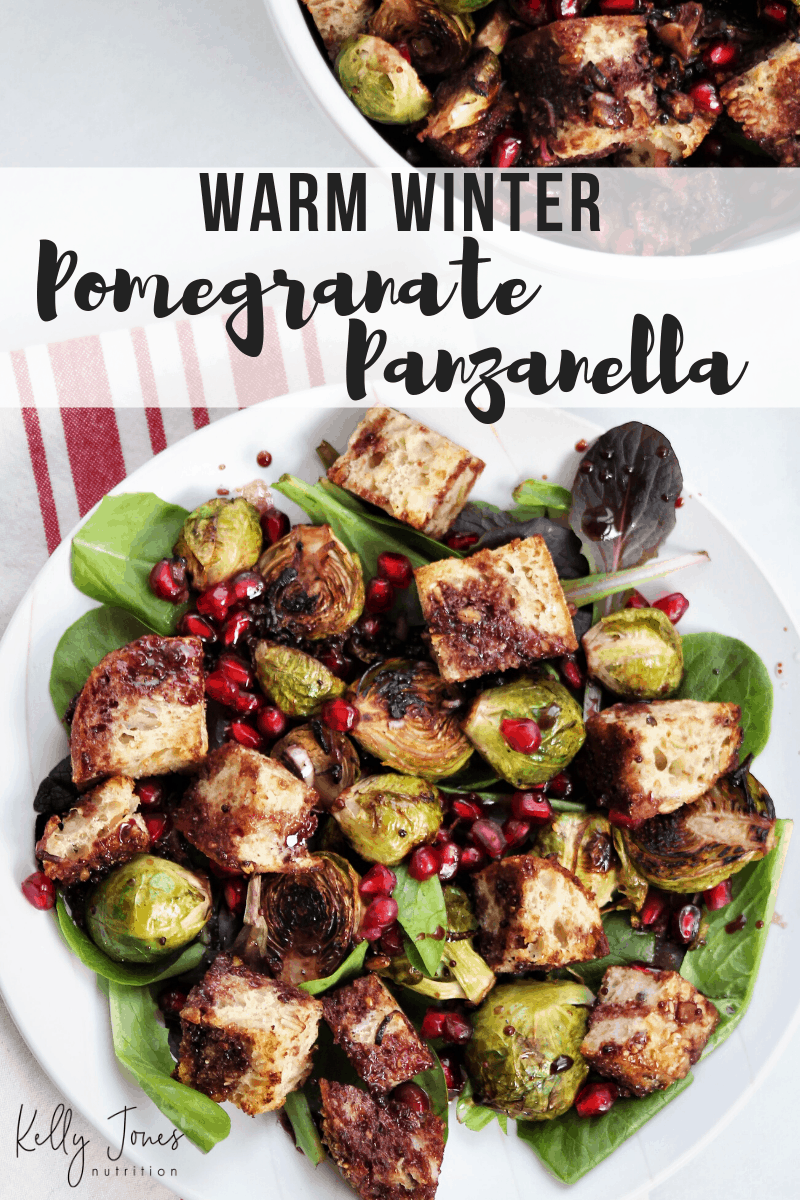 My first time experiencing a panzanella was five or so years ago in San Francisco at Zuni Cafe {highly recommend}, and it was aptly listed on the menu as “warm bread salad”. While a traditional panzanella/bread salad utilizes tomato, Tim and I shared Zuni’s version with scallions, garlic, dried currants and pine nuts. Even better, we were sitting at the perfect table to watch our entire meal be prepared, including this salad, in which the bread cubes made their way into the firey brick oven a couple of times before being tossed with greens and set on our plate. This was my inspiration for this recipe!

Sweetness in a Panzanella Salad

While I kept the shallot flavor, instead of currants, the perfect sweetness in this recipe comes from reduced pomegranate juice in the pomegranate dijon vinaigrette I created. It’s not only used to top the finished product, but added to the brussels sprouts before they hit the oven, and the slightly crisped whole grain sourdough cubes before they return to the oven for a minute as well.

The juice used in the vinaigrette is full of antioxidants. POM doesn’t just extract the juice from the seeds, but the pomegranate is whole-pressed, meaning a unique blend of polyphenol antioxidants from two whole pomegranates – including its fruit, pith and rind – is found in each bottle. This recipe also calls for the pomegranate arils themselves to add a bit of a fresh crunch to compliment the slight crunch of the whole grain bread. If you’re intimidated and need guidance to seed a pomegranate, check out this video from my friend, RD and chef, Julie Harrington. 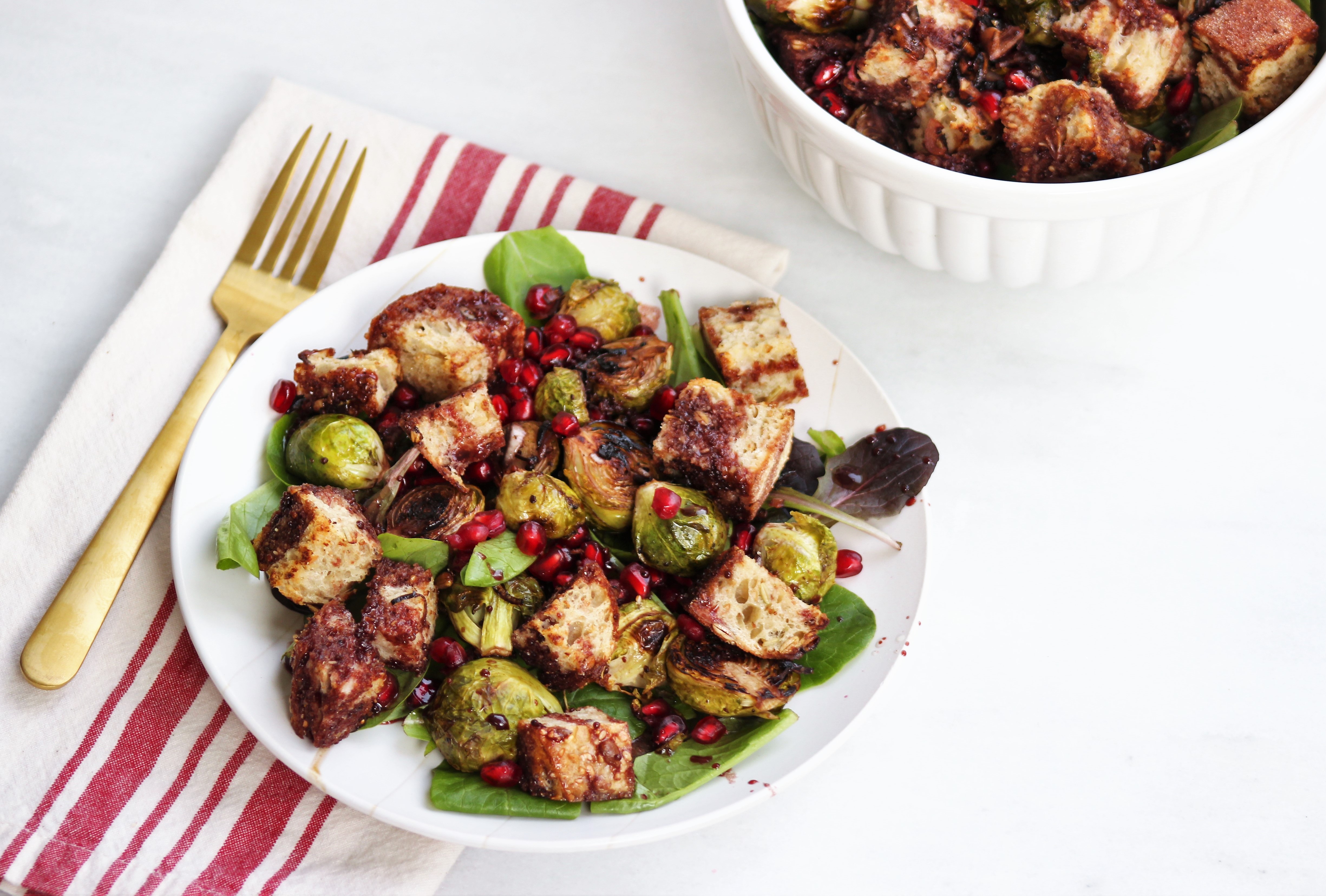 In addition to the potential fitness benefits I mentioned in another post, a preliminary study out of UCLA found that a small group of older adults with age related memory complaints had increased verbal memory performance and functional brain activity after just four weeks drinking 8 ounces of pomegranate juice daily.* Maybe my frequent ingestion of POM lately will help a bit with my pregnancy brain! 🙂

*These early scientific results on the impact of pomegranate juice on the brain have not yet been adequately studied. Further clinical research on larger populations is needed to help establish causation and to determine the long term effects of pomegranate on memory and cognition. 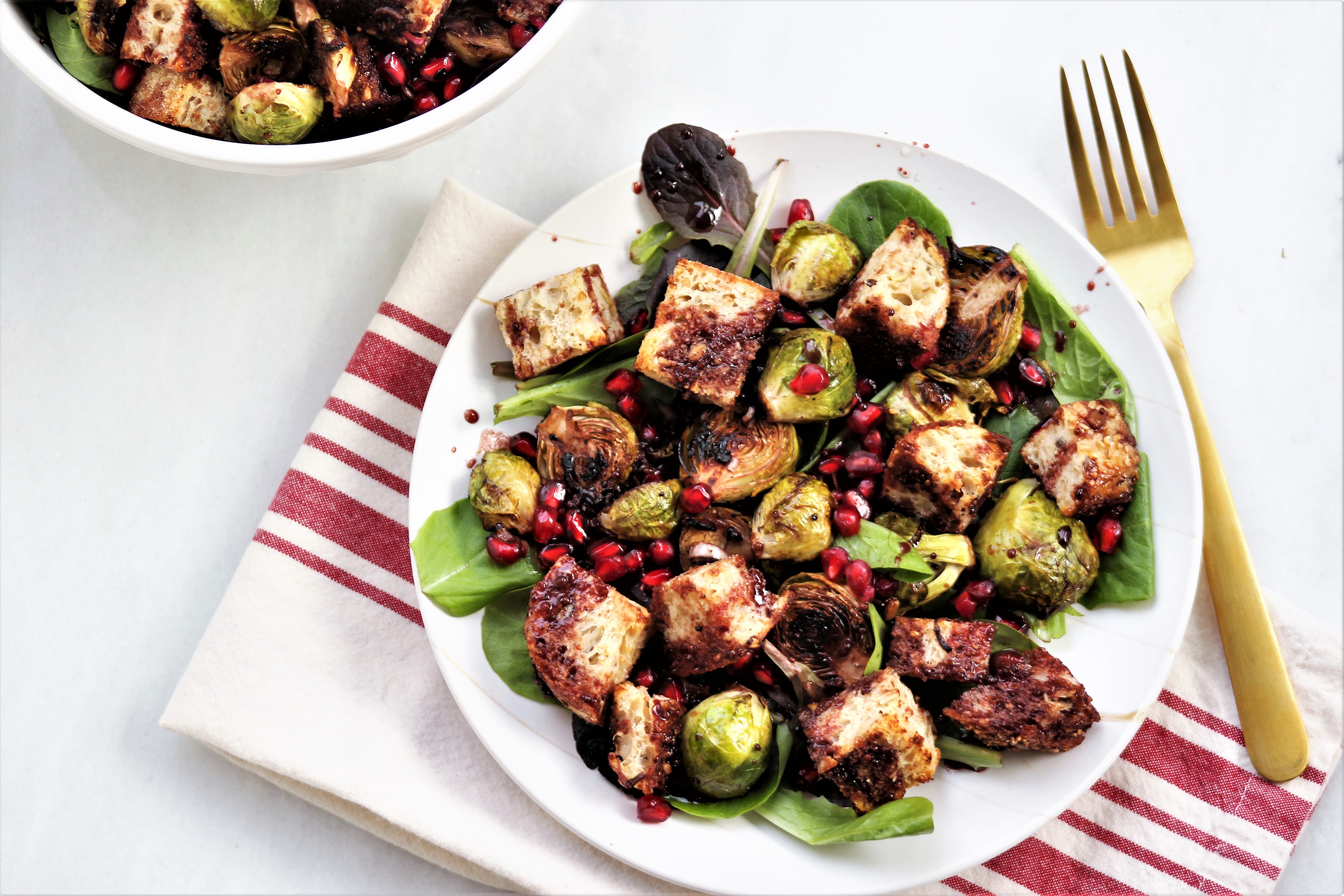 While it does take a bit longer, cooking the pomegranate juice down to a pomegranate reduction means more antioxidants per serving of this salad as well as a stronger pomegranate flavor than if I had just used the straight juice in the vinaigrette. It also makes the vinaigrette texture thicker which I love! Who wants a watery salad dressing? Nobody! It also soaks perfectly into the whole grain sourdough I used without making it soggy at all. {Whole Foods has an awesome whole grain seeded sourdough at their bakery!} 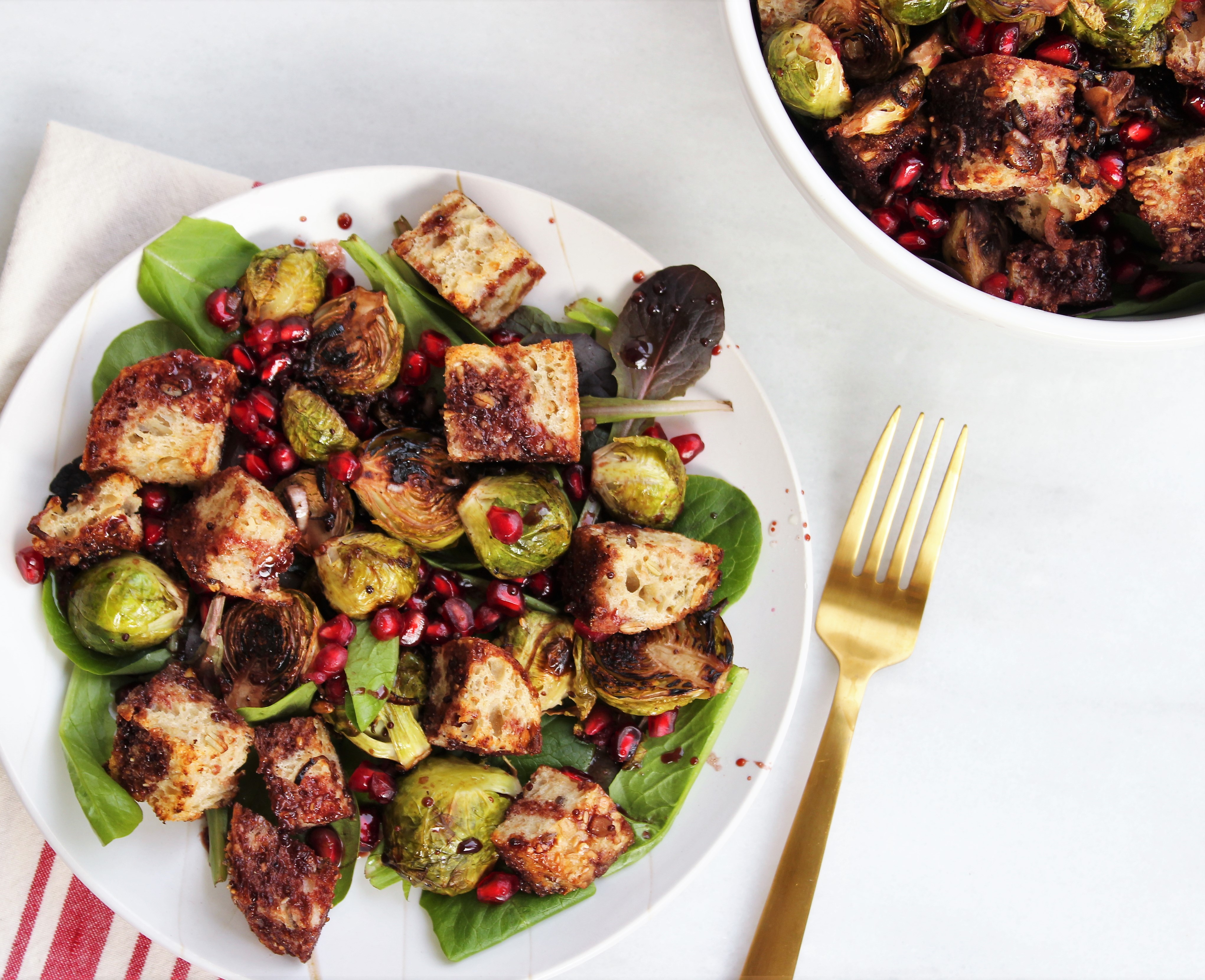 You can serve this salad as a side or appetizer with a meal, or I highly recommend topping it with grilled or roasted tofu, salmon, or poultry. If you want more pomegranate recipes, be sure to click on the recipe redux link at the very bottom of this post! 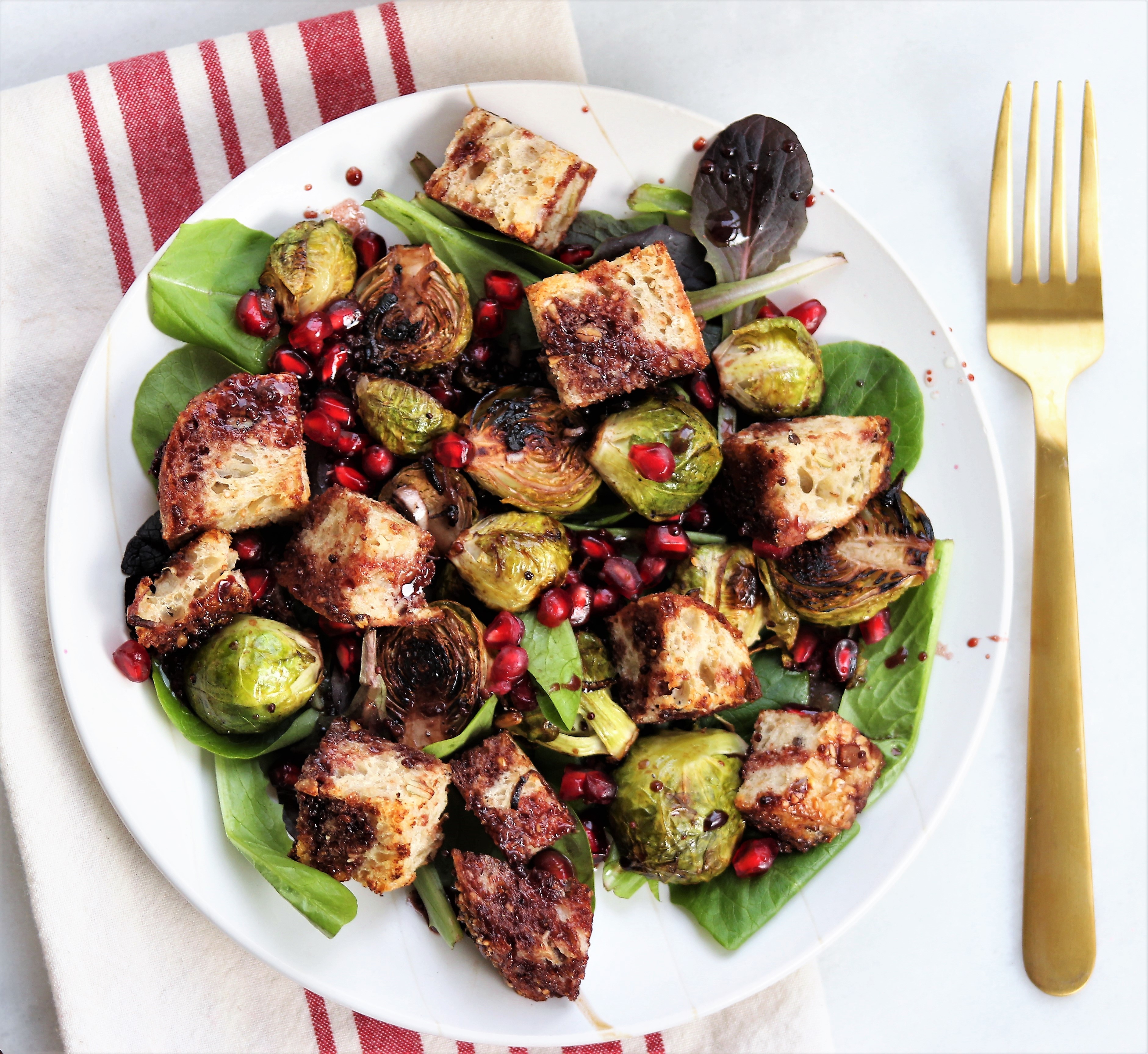 To make the vinaigrette:

To prepare the salad:

Tried this recipe?Let us know how it was! 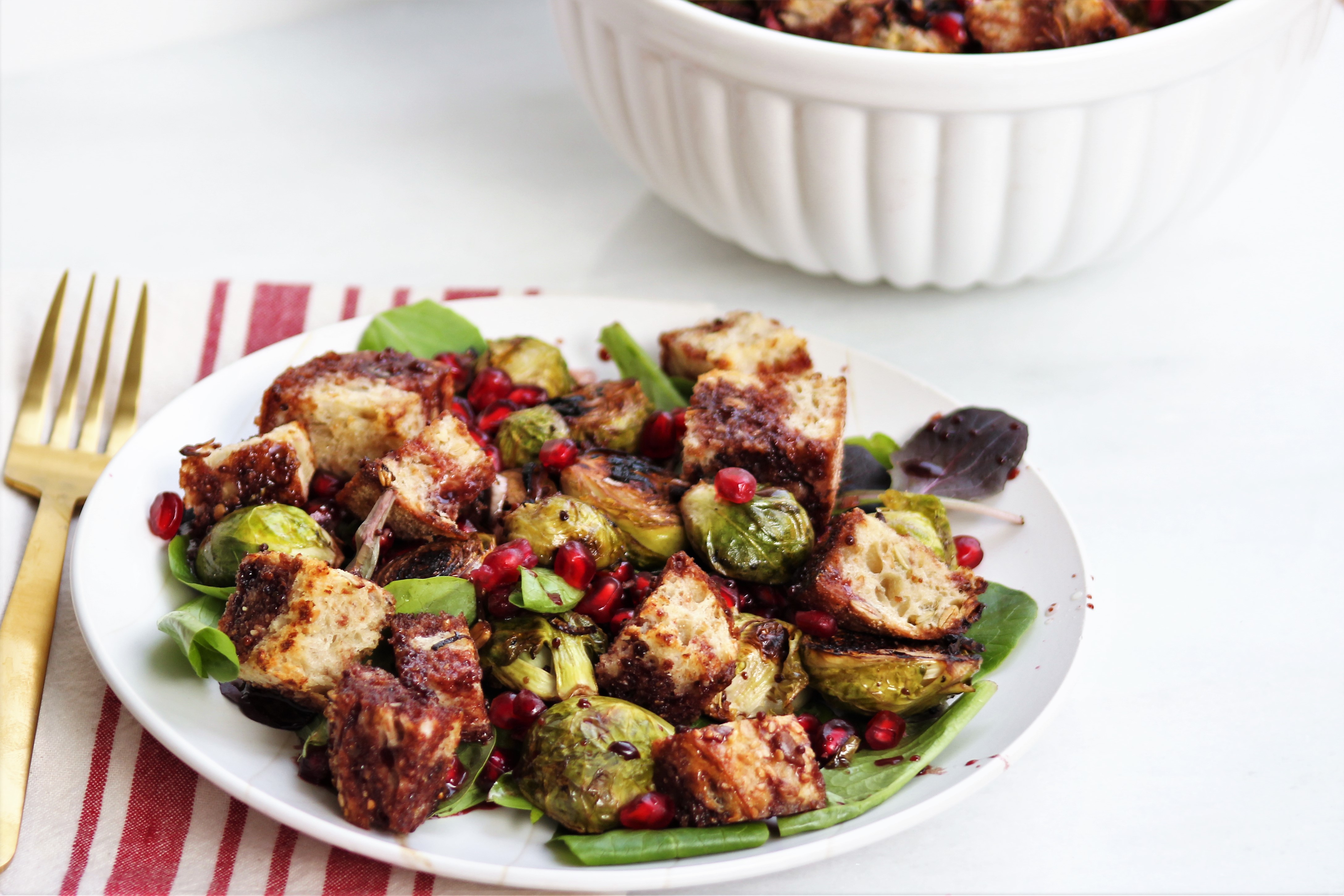 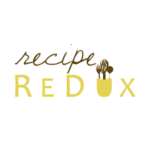 Couldn’t start August without acknowledging some

Even if you can only spare 5 minutes. Even inside

Who else is taking day trips this summer? Its way

I’m a dietitian who loves to travel and becoming

Hands up if you’re here for efficiency and pract