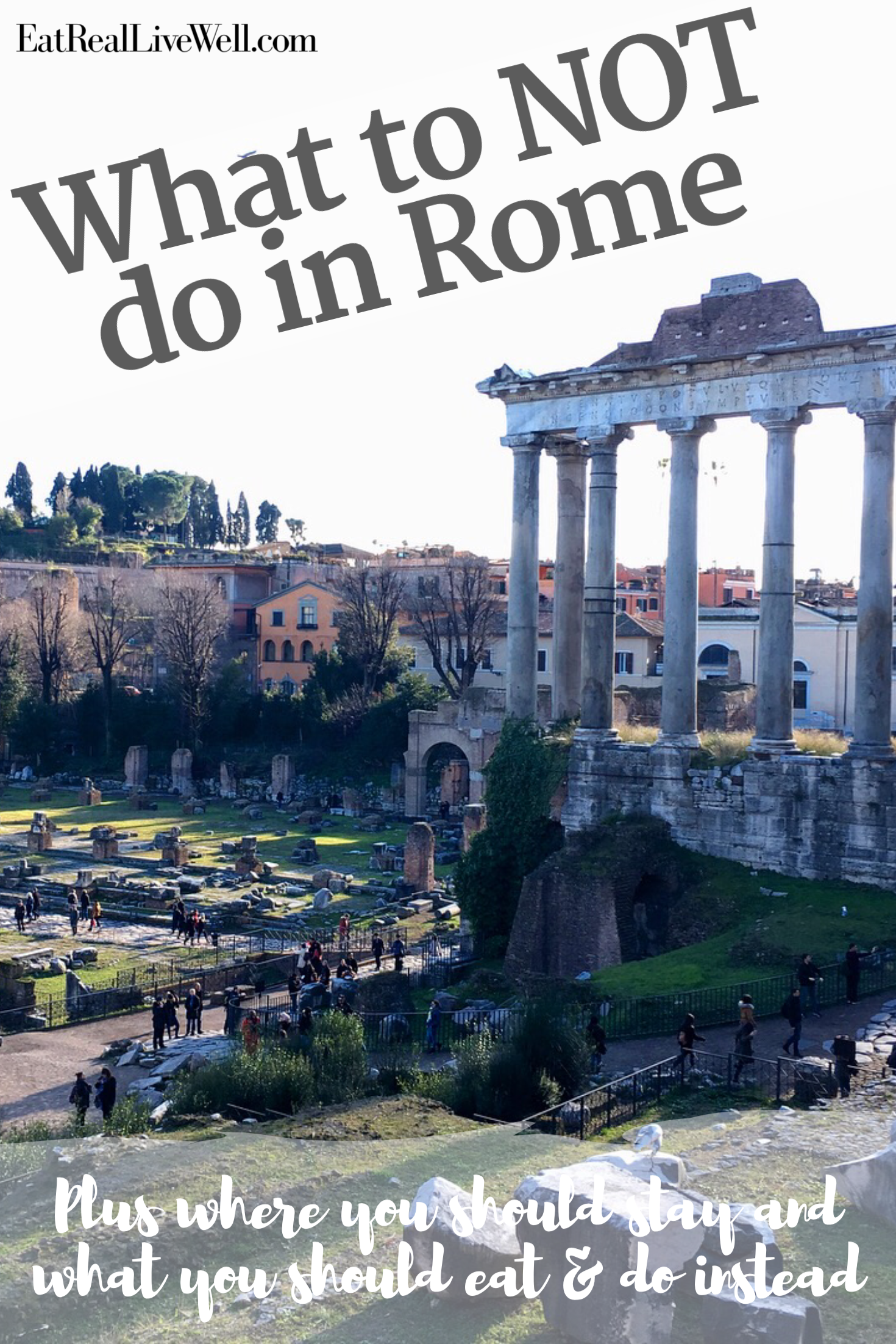 Remember that time I was recapping my Italy trip from January? I didn’t forget our last stop! Better late than never to share my experiences, right? Especially in a way that I think it can help others have a better initial impression of this city. Rome was the last city on our trip. While I grew to love it so much more than my first impression, as mentioned in my Florence post, I still wish we had traded out one night in Rome for another in Florence. 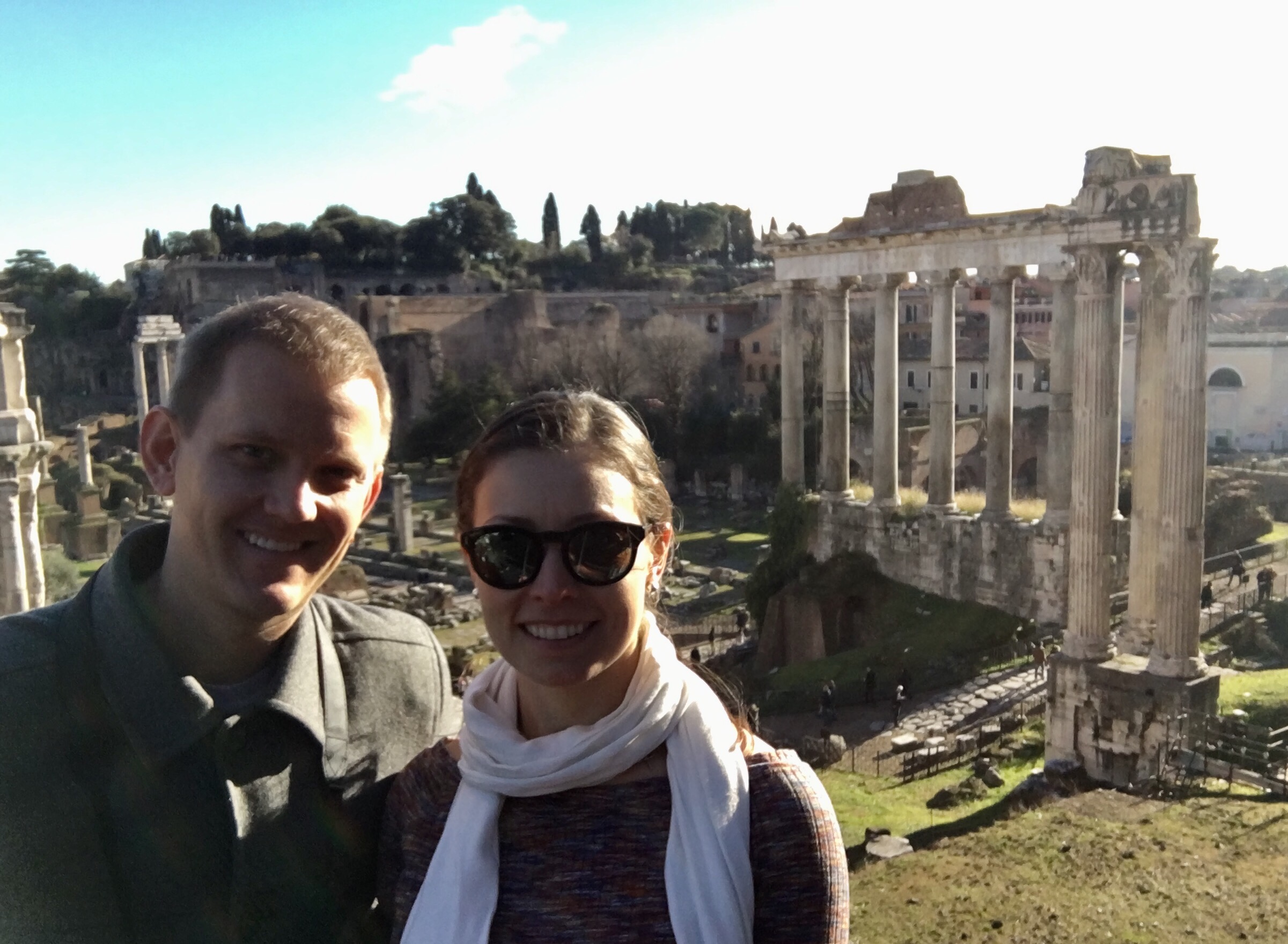 Miss my other Italy posts? Check out Milan, Venice and Florence!

There are a few reasons that our first day in Rome wasn’t our favorite day of the trip. I’ll admit that the pouring down rain did not help (though I shouldn’t complain as we were blessed with clear skies the rest of the trip), but I’m going to take a different turn with this blog post and talk about the things we would do differently if we were to travel here again! I wish someone had given us these tips ahead of time, so I hope they can help some of you.

After, I’ll end on a positive note with four things in this city that we loved (yes, one includes the Vatican!).
For starters, a main reason Rome wasn’t our favorite Italian city is the level of tourism it brings. Not to say that I don’t think people from all over the world should come here for it’s unique history and amazing old architecture, but I felt that the authenticity of the people, the food and the shops were sub-par. With all of the amazing structures and landmarks that should encompass what I’ve always thought Italy to be, I felt the least bit of Italian culture here (and the least safe).
Don’t Stay Near the Spanish Steps
The crowds, the food, the pushy people and the level of safety… not my cup of tea (or espresso, or prosecco). I can stand crowds and accept them. I love cities, I don’t get claustrophobic, but this was just too much. You see these amazing photos, but what you don’t see are people throwing souvenirs you don’t need in front of your face and elbowing you to get in front of you to take the pictures. Yoga breaths got me through some of this!
It was also hard to find good food around here. While there may be a restaurant that looks authentic, many aren’t making food from scratch like you see in other areas of the country (or even city). Walking down one cute street that we thought would be more authentic, there were people outside so aggressively trying to get us to eat at their restaurant (following you on the street and getting way too close to your personal space) I thought I was about to get dragged in and forced to eat! When here on day one we finally landed at Origano Trevi where we thankfully had a good pizza and vegan calzone. Highly recommend that you all stop here if you need lunch after visiting the Spanish Steps or Trevi Fountain. Grazie Origano Trevi!

Finally, the safety.  We stayed at the Berg Luxury Hotel which we thought was in a nice area being close to the Westin, Four Seasons, etc. Our room was modern and newly renovated and very big for Italy, too. Unfortunately, walking outside in front of said hotels to grab bottles of water at night left me feeling very unsafe with people seemingly following us on a few separate occasions. Last, the noise (think what you’d expect from a room in Vegas) went all night in the room above us and even with complaining to hotel staff, they didn’t do anything about it. (Were we not embracing “when in Rome” as much as the rest of our hotel?)
…Stay in the Trastever Area
Maybe even at an air bnb! My friend Jess has a great blog post on her trip to Rome, too so use her tips on where to stay. We had dinner over here on our 4.5 year anniversary (I promise we aren’t that weird – we got engaged & coincidentally married on Friday the 13th and it was also Friday the 13th) and while the restaurant we would have rather ate at was closed for the week since the family was on vaca, we found one that we absolutely loved! More on that below ????
Don’t Screw Up Reservations and Opening/Closing Times
This one is a bit embarrassing, but I consider myself and my husband two intelligent people that are more than capable of following a plan. Tim killed it at planning {most of} this trip in under a month and had both our Vatican and Coliseum tickets booked ahead of time. The problem is, we went to the Vatican one morning and then walked all the way through the city and to the Coliseum (not close). While we love walking and saw cool things along the way, we were starving by the time we got there and spent a good 30 minutes walking around the same two blocks to find “lunch” (at 3 PM?). By the time we were done and made it to the Coliseum, they were no longer admitting people. It was our last day. We didn’t go inside the Coliseum. 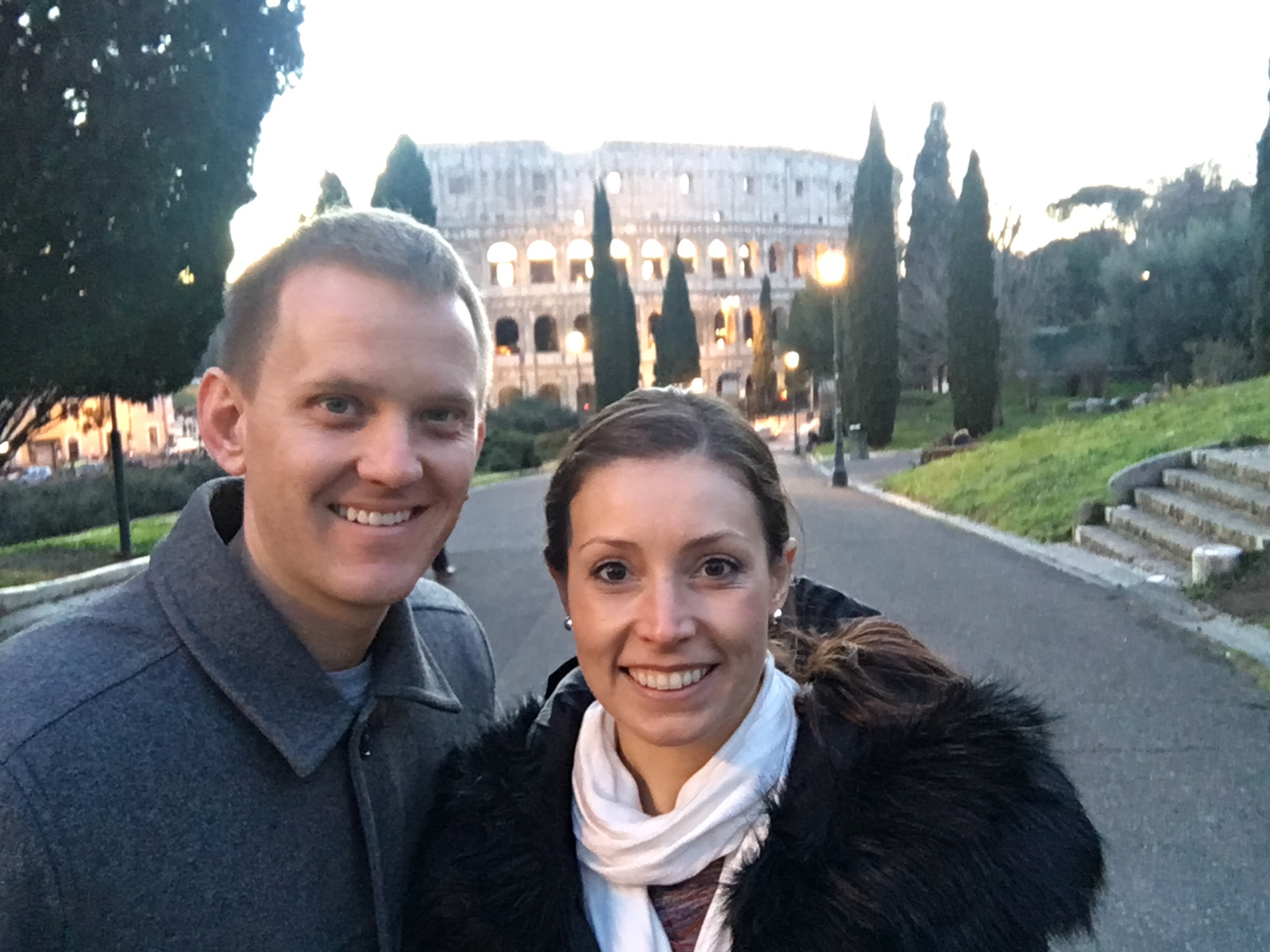 While I still wish we’d done both, not making it in here brought us to one of our favorite parts of the trip that you’ll read about below!

Do Book Tickets in Advance and Arrive Early

Yes, because of what happened with the Coliseum, but also… the line at the Vatican was no joke when we were walking out! While you don’t need tickets to get into St. Patrick’s Cathedral, get there early to limit your wait. If you are going into the rest of the Vatican and museums, purchasing tickets in advance means a shorter line, but still one that will be shorter if you arrive early in the day.

Don’t Walk into Restaurants That People are Standing Outside Of
I don’t know that I need to elaborate much more here. I had read it on a few travel blogs before we arrived and then experienced some restaurant stalking as described above. It sounds cute and welcoming, but isn’t so much. They’re likely all overcompensating for not-so-great food.
Don’t Book a Really Early Morning Flight
One of our biggest fails right here. We thought that with a 6 am flight we could have one more night out for dinner and a couple of drinks, then take a train to airport and pay for the Air Italia club to get some sleep for a few hours. Well, the last train to the airport (a half hour away from the city) leaves just after 10 PM and the earliest in the morning is after 5. The Air Italia club closes at 11 and kicks everyone out. Therefore, you either need to book that hotel room for one more night even though it’s just a few hours of shut eye, or just choose a different flight time!

Where to Eat & What to See

After the Vatican, you have to refuel at Bonci pizzarium. My cousin Eleanora’s boyfriend told us about it while we were in Milan, so we were lucky to have the inside scoop! We trekked in the torrential downpour from the Vatican to arrive as if we’d jumped in a pool and figured we would get to sit down and relax while waiting for our pie. 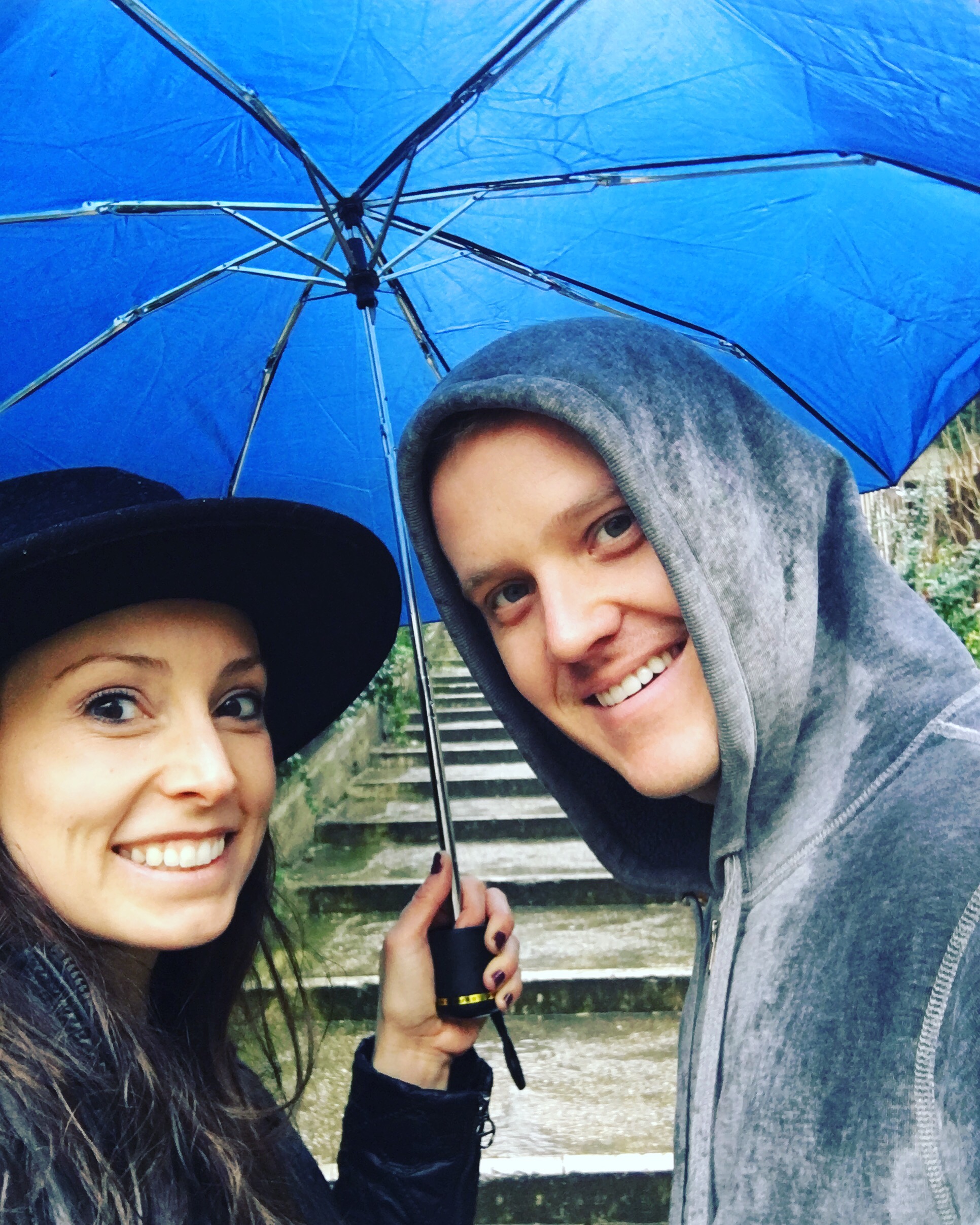 Warning: This is not that type of place, but you won’t care once you bite into your pizza! They have a wide variety of Roman style pizza that you select by the long slice for them to cut with pizza scissors and heat up in the oven. You can grab a beer or wine from their cooler to sip on while you’re waiting (we clearly did his after our one+ mile monsoon walk). They have a couple of tables outside and a couple of counters to stand at inside. Luckily we got in right before it got super busy and had a little area on a counter to enjoy some of the best and most unique pizza we had on the trip! It wasn’t the Napoli style that we usually love, but had a nice crispy crust on the bottom and was bursting with flavor no matter the variety.

We shared a slice of plain tomato pie and a couple with bean puree and vegetables. Tim also enjoyed a classic tomato and cheese slice. Highly recommend!

Enoteca Ferrara
After browsing through the largest wine list I’ve ever seen (this is just the reds, there was an equally large one of whites), we landed on a phenomenal Lambrusco to enjoy. Tim ordered some shishito peppers to start and I had a fresh angel hair pasta while Tim enjoyed gnocchi. He had been talking about tiramisu the whole trip but hadn’t gotten it yet, so now was his chance! He ate the whole thing himself and loved it while I turned my nose up because I think the stuff is basically soggy bread ????. Cheers to this meal! 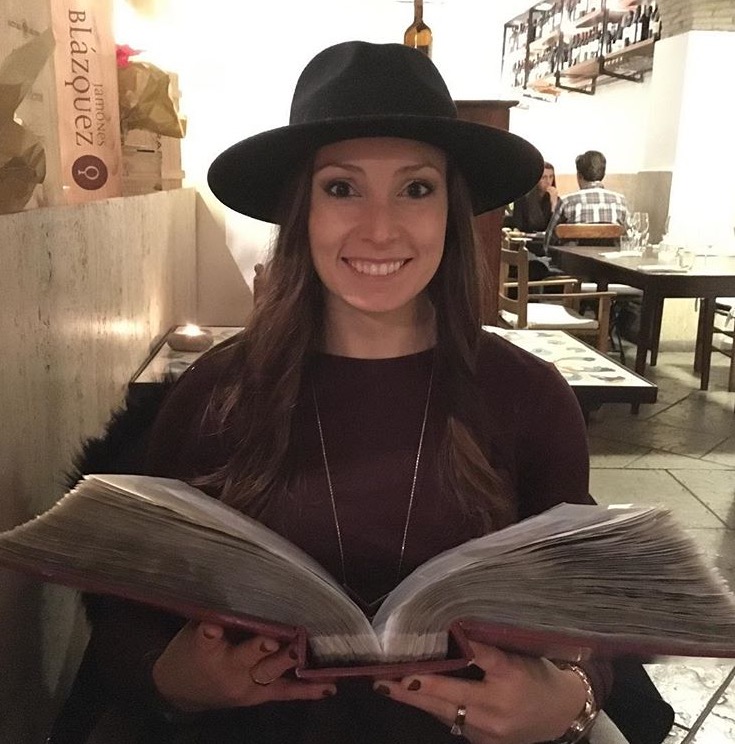 Unfortunately no pictures were allowed in this entire church (all 3 levels of it)! Definitely check out their website to get a peak at this hidden gem. We figured since we sold our Coliseum tickets to a couple of people on the street that we would transfer those euros to head down underneath the main church, built in the 12th century to view the 4th century church that was later discovered to have been built over a 1st century Pagan temple. How’s that for some history?
The Spanish Steps, The Trevi Fountain, The Pantheon, the Coliseum and the Vatican

I mean, duh. I don’t think I had to tell you any of that! While the Vatican and St. Peter’s Basilica were the most breathtaking, I was very impressed by the Pantheon’s architecture inside (it definitely beats the one in Paris).

The Trevi Fountain was beautiful and the Spanish Steps were obviously cool, too, once you got past the people trying to sell you selfie sticks and other’s pushing around. 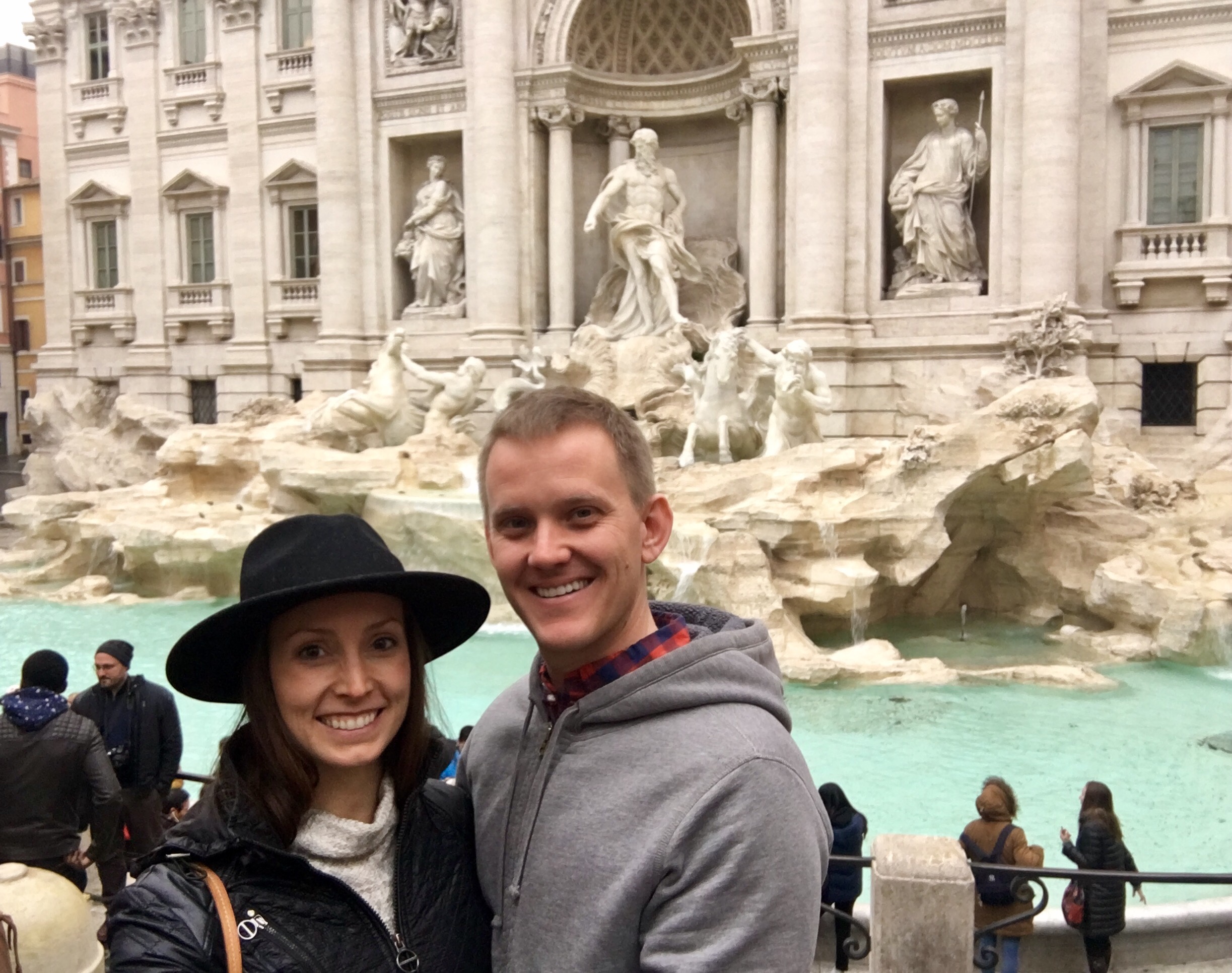 The historic area leading from where Caesar was killed up to the Coliseum was absolutely unbelievable to be standing in.

Here’s to hoping my tips can help you have a flawless experience in Rome! I’m sure I’ll be back someday and know now what to do differently. I can only imagine it getting more touristy by the time I want to bring my future kids there! Check out some more pictures below of scenery, food and my extended Italian family that we were able to see briefly while their.

Have you been to Rome? Comment below and let me know what you recommend for hotels, restaurants and other unique things to do! 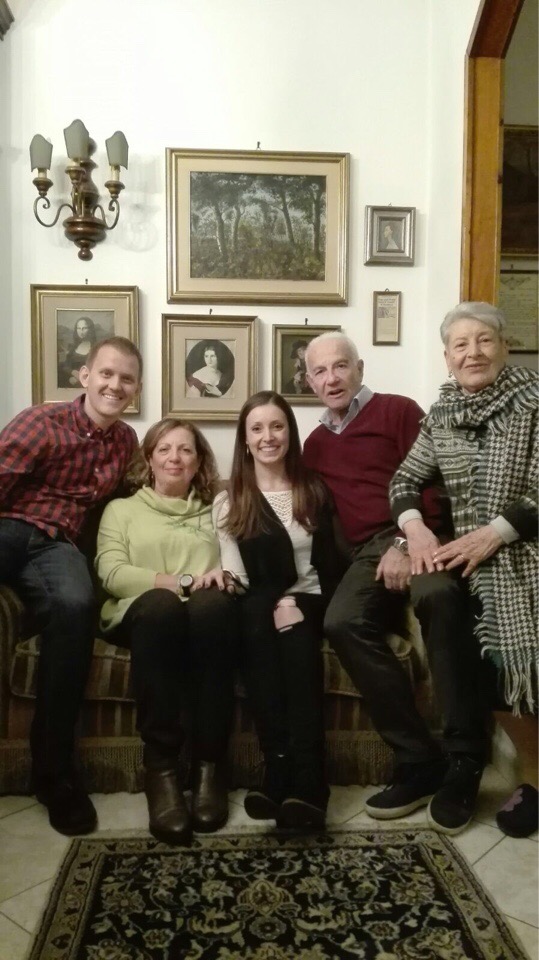 Stop, drop and yoga in ancient Rome! Gotta keeps those hips stretched out while traveling!