I am writing this post specifically for my students. They have learned about the science of food and nutrition up to this point in class and this week, they are taught how to actually apply it to their life to be more healthful. The biggest complaint I hear about from students is that eating healthy food is too time consuming. I especially hear this from students who are also parents coming back to school. Just like studying outside of class requires time management, so does your meal plan! How can you possibly stay energized to take on school, work, exercise and family time without eating well? I know I wouldn’t be able to! So it all comes back to planning and preparation. Taking a few hours one day to prepare a couple of meals and ingredients for later in the week will make your life less stressful and will save time, money and energy later.
First, it is important to have a running grocery list at all times. I cannot imagine going to the grocery store without a list! {{How some people manage, I will never know}} For some of you maybe this is your first goal. Get accustomed to having a grocery list of things you actually need for the coming week. Put a notepad on your fridge or by the family computer to update when you realize you need something. Also, if you make a time saving rule that you won’t run back to the grocery store Monday-Friday, you will be sure to get everything you’ll need on that list. Oh yeah, and only put healthful nutrient dense foods on the list. If you only have nutritious foods in the house, you’ll only eat nutritious foods.

Once making grocery lists is just a part of your lifestyle and you don’t need to give it a second thought, your second step is to make sure those lists actually correspond with meals you are going to prepare for the week. Start just by having a plan for dinner each night. This means that yes, you will choose what you will be eating for the coming week ahead of time. Ditch the excuse of “but what if I don’t feel like X on Wednesday”. If you have 4-5 meals planned you can move them around! This way you are going to buy only what you need and be much less likely to eat junk or order out. After planning dinners becomes part of your lifestyle, start to include breakfast, lunch and snacks in your planning.
Now, if you’ve gotten used to the organizational side of things on paper, that doesn’t mean it has been easy to throw those meals together each night. So this is what makes life the easiest: weekly food prep. Based on your family’s schedule, Sunday may not be the best day for you to prep so evaluate your week and pick whatever day is easiest for you. For me, it is Sunday so in the fall, I do all my food preparation while football is on (we are lucky enough that the kitchen is connected to the living area and I can see/hear the TV). This way, I get to pay attention to the games but instead of sitting on my butt, I check things off my to do list and make eating healthy meals and snacks easier the rest of the week. I know there is no way especially Tuesday, Wednesday and Thursday, that I am going to get a workout in and make a satisfying healthy dinner, so food prep has become a big part of my life. Below I have an example of a typical week of food prep in the fall. I think fall and winter are sometimes the easiest seasons for meal prep because of one pot meals like soup, chili, and even crockpot oats for the morning.
A couple of things that I do most weeks are prepping black beans and garbanzo beans from dry and baking potatoes and sweet potatoes. You can do both of these things at the same time. I prefer dry beans over canned because it is much more fresh and also easier than wondering if the cans are lined with BPA (since most cans are). Plus, its more economical. I usually prep 1/2 of a 1 lb bag but you could prep the whole bag if you have a big family or if you want to freeze half.
Since the oven is on, I typically maximize the space and energy being used by baking or roasting something else. This week I roasted brussel sprouts, cauliflower, carrots and onion. I also put a poblano pepper in to roast for hummus as well as a delicata squash and an acorn squash, each halved. 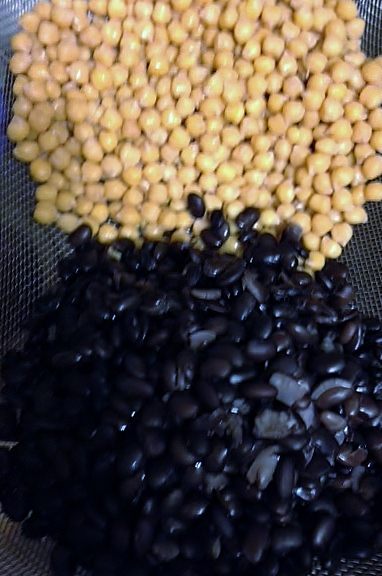 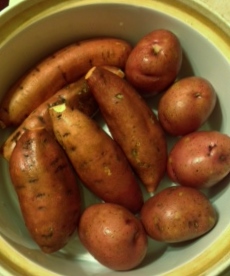 Prepped & Drained Beans // Red Potatoes & Sweet Potatoes  // Veggies for roasting
While the beans were finishing up I started chopping ingredients for the soup & sloppy joes below. I was sure to chop enough onions and garlic for both of those recipes at the same time. I put some farro on the stove that I used to make this quick dish with it Wednesday night, and also used some for a salad during the week. When the beans were done, I started to make my potato kale and leek soup. With that going, I also started my cooking lentils for my lentil sloppy joes. 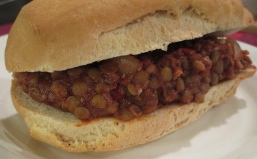 Potato, Leek & Kale Soup            //  Lentil Sloppy Joes
Each week it is essential to have fresh fruits & veggies available for snacks at all times. We always rinse romaine & mixed greens and have a lot ready in a huge salad bowl in the fridge. In addition, I will chop carrots, celery and when we have them peppers and other veggies to dip into hummus as a snack. I make my own hummus too since its much more fresh. Red chili pepper hummus is my go-to but this week I used the roasted poblano and garbanzo beans to switch it up. I don’t have any hummus recipes on the blog but here are lots of simple ideas: hummus.

Chopped veggies                  Roasted Poblano   Poblano Hummus
Now what do you do with this stuff during the week?
I always have garbanzo beans leftover after making hummus. My husband loves them plain as a snack but I prefer to add them to salads.
Black beans are also something we add to salad (below w/ avocado) and one day I added to half an acorn squash w/ farro, brussels & hummus and brought it to work for lunch (left below). On Thursday I made a half batch of quick black bean soup. Again, no recipe on the blog but here is a crockpot one (aka throw ingredients in and its done in 8 hours without you doing anything else). 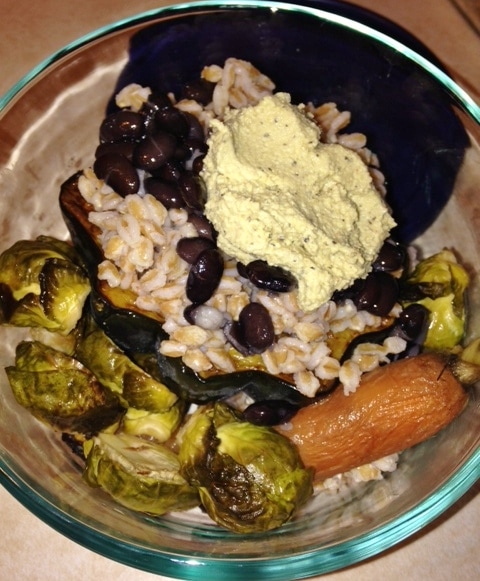 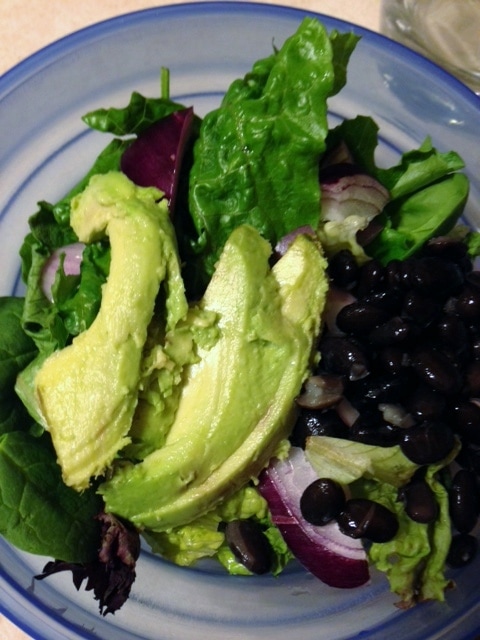 Potatoes are generally eaten by us alongside veggie packed omelets or with black beans and topping of choice (salsa, hummus, guacamole). Obviously possibilities are endless with this food so do what you wish (other than adding butter, bacon, sour cream, cheese etc). I often have sweet potatoes right out of the fridge as a pre-workout snack after work. You could also throw this recipe together quickly.
The roasted carrots, brussel sprouts and cauliflower were added to salads this week but could easily be thrown into a tortilla wrap or omelet for a meal too. I even dip brussel sprouts in hummus as a snack! I also mixed the brussels with farro in a pan with some garlic and olive oil and added them to one half of delicata squash for dinner one night. I liked it so much it became lunch at work the next day too. 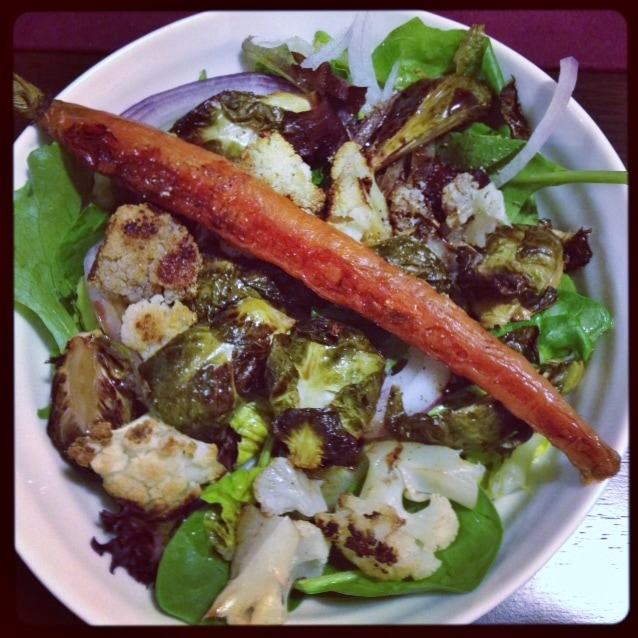 As mentioned above I used most of the farro for my farro fried rice, and it should be self explanatory that you eat the kale soup for lunches and dinners. The sloppy joes have recommendations for serving within the post itself.
For other ideas on food prep, head over to the blog of another Registered Dietitian, The Lean Green Bean who has lots of posts on the topic!
Hope this is helpful and feel free to leave comments and questions below!