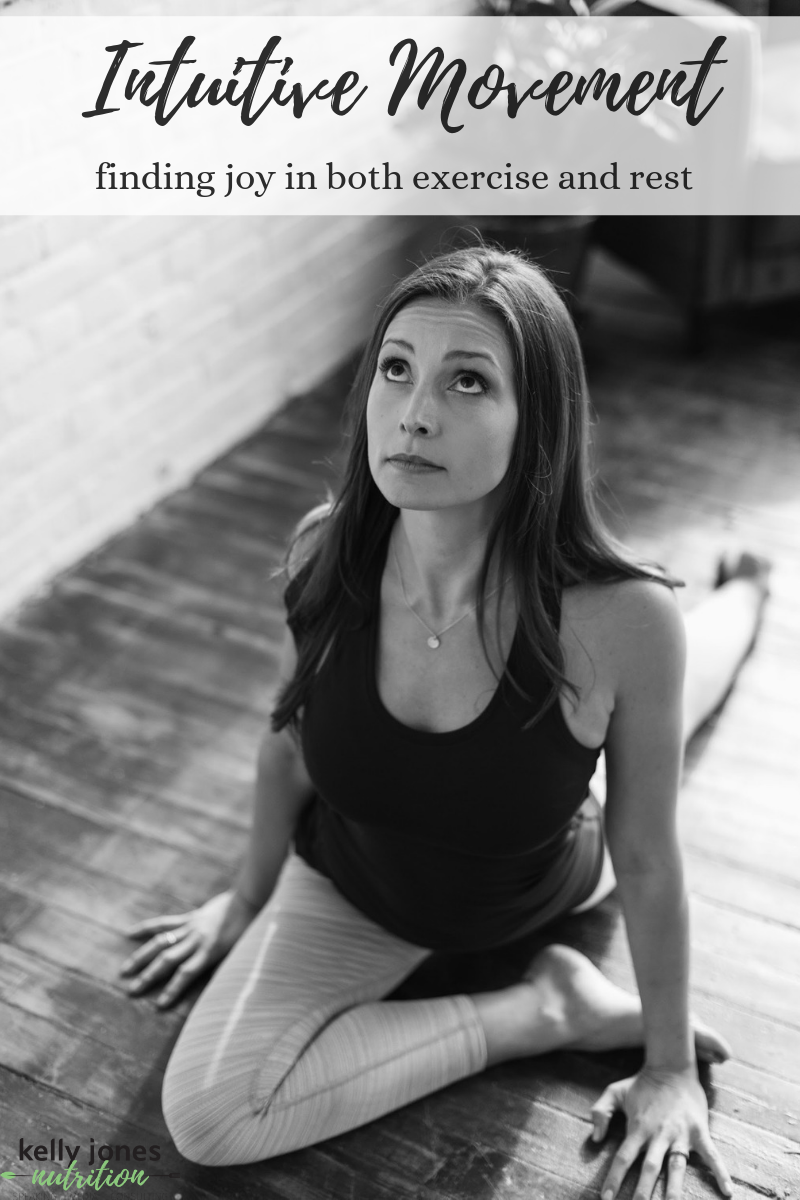 You hear me discuss intuitive eating, especially as it relates to sport, and if you follow me on Instagram, you know this is brought up on a regular basis. One of the 10 principles of Intuitive Eating (IE), is “Exercise – Feel the Difference.” What’s meant by this, in short, is to exercise for energy and wellness rather than for calorie burn and weight loss. By moving your body for those reasons, you’ll feel the difference in your motivation to move and you’re stress levels and overall health may improve, too. In this post, I’ll discuss more of my relationship with exercise, with tips along the way to find more joyful and intuitive movement.

I may be a registered dietitian that preaches self-care and flexibility to feel your best both physically and mentally, but it hasn’t always been this way. For the past few years I’ve made it a point to speak out about disordered eating and eating disorders during NEDA’s national eating disorder awareness week. This year’s theme is “Come as you are” so I’m using this post not to talk about my clients or where you can or “should” be, but about where I am and where I’ve been in my health journey when it comes to exercise. 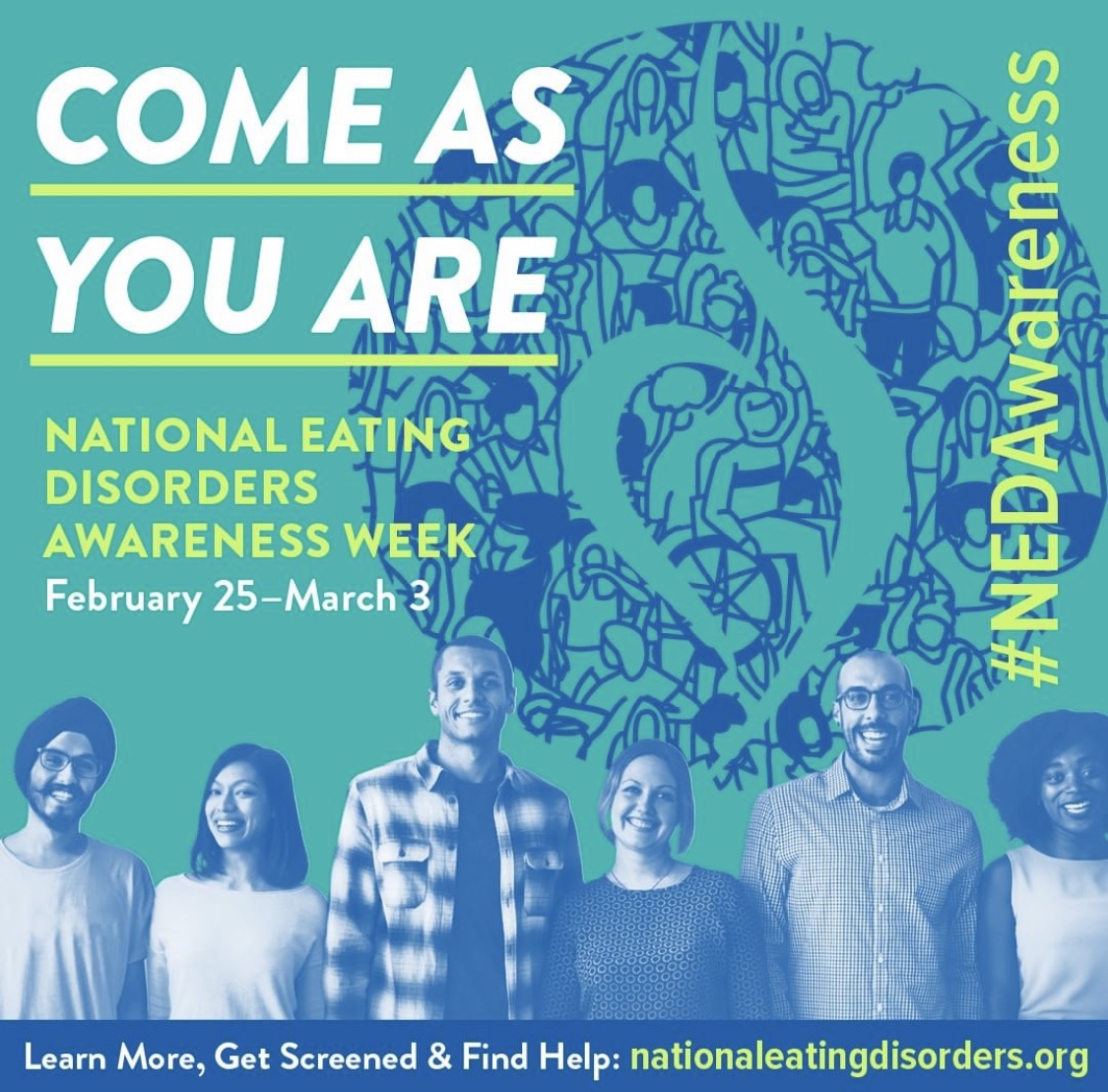 What drew me to nutrition was my mom healing from food rather than recommended surgeries and medicine. But, once I got wrapped up into what I thought was the pursuit of health, I found myself gravitating towards non-science-based information prior to completing my nutrition and dietetics education. First hand views of Akins and diet cycling skewed my perception of a healthful diet leading me to even go low carb at one point as a student-athlete myself!

Even during my education, the focus was often not only on how dietary and lifestyle changes could improve health markers and mental well-being. There was also always that idea driven home that weight was directly tied to health and that pursuit of weight-loss would result in better health. Yep it’s true, even evidence-based medical and nutrition education and practice had been influenced by diet culture.

On one hand we learned of the dangers of restriction and eating disorders, their prevalence, how they develop and how we should treat them. Then in the same class, same clinical rotation, or from the same healthcare professional, we’d learn to recommend to patients in larger bodies what is diagnosed as an eating disorder in thinner bodies. This still continues today, though more health professionals like myself are pushing back since science actually doesn’t support weight loss diets as a benefit to long-term health {click for more on why not to go on a diet}.

Based on my education my preconceived thoughts on nutrition and “health”, as well as my status as a competitive Division I athlete, my own thoughts and behaviors surrounding my performance goals and personal health were a bit disordered. No, I was never close to clinical diagnosis for an eating disorder, and to the average person, I was just healthy. But, while disordered behaviors weren’t evident with my exercise, the reason behind my fitness (fear of weight gain and maintaining an athlete identity) wasn’t the healthiest. I was nowhere close to practicing intuitive movement. It wasn’t until a running injury -when I was trying to keep up an athlete status with intensity and duration in my fitness plan post college- that I was forced to take a step back and give my body rest and some much-needed respect.

Get in My Head: The Progression From Disordered Fitness to Intuitive Movement

The beginning of this range was my senior year of high school. The first disordered thoughts I ever remember having were related to making up for food intake with exercise. I vividly remember when me and my best friend got gym memberships so that we could cross-train for swimming with some weight lifting per the recommendation of our coach and with our goals to swim in college. Discussions on going to the gym every time we “ate something bad” were brought up sort of as a joke. It seems harmless to the average person since we didn’t head to exercise every time we ate a cookie or stopped by Wendy’s and since we were already at swim practice often enough. Still, to a health professional looking back now, I know that this is how disordered eating and exercise start, and that disorders behaviors are what ultimately lead to clinical eating disorders.

By the time I was in college, I was exercising even more so that I couldn’t fit more in if I wanted to. But, not knowing how to fuel my body as an athlete (yes, even as a nutrition student) meant I’d wind up binging or over-fueling at times. This was for sure from inadequate energy and nutrient intake earlier in the day just from lack of knowledge. It led to inconsistencies in my performance I’m sure, but more so the thought that because I ate so much at once, I better eat less at the next meal because I already had all the energy I’d need to support exercise, right? If you read my low-carb post, you’ll also see I had weight loss vs. performance as a goal the summer after my freshman year and that clearly didn’t go well.

By my senior year, I knew how to fuel to perform well better than ever, but the thoughts behind exercise in the off-season were weight related, not performance related. That undoubtedly continued into grad school.

These are my grad school and early career years. In grad school, I was no longer a student-athlete, but I didn’t know how to be anything else. I made sure that I was exercising as many days of the week as possible, because in my head, I had to maintain that identity somehow, even though my competitive swimming career was over. Since it was hard to stay consistent, and my body didn’t feel as strong, my solution was to sign up for a half-marathon. Why not?

Well, training for a half marathon on a treadmill in the Buffalo, NY winter, when the race itself was on the steep hills of Fairfield, CT was not the best idea. Not to mention I came from the lowest impact sport you can identify. I’d squeeze in these long long runs no matter what, even at 10 PM with a clinical rotation at 7 the next morning, like a gerbil on the machine in my apartment’s tiny gym. This not so coincidentally is when my anxiety decided to really show it’s face, too. While reduced stress an increased happiness are supposed to be associated with fitness, it was actually becoming the opposite for me.

After I really hurt my knee at that half-marathon, I didn’t let up. In my head, despite the pain, I was an athlete, right? So, I maybe switched it up and spent time on the stair master and different ellipticals to balance out the treadmill time, but that idea that I had to be in the gym certain hours was maintained and a bit of an obsession. I didn’t teach diets, but I did practice that daily intense exercise was mandatory. It also felt to me like if my workout would be under an hour, why bother?

Needless to say, this all led to bad enough IT band syndrome that I could barely walk without extreme pain. I still pushed myself through other activities and ultimately wound up with a stress fracture in my foot from gait problems (note: I’ve never been amenorrheic and it was not from female athlete triad). My anxiety hit an all time high when I was forced to step back from high impact activity, so I decided I had no other choice but to try yoga again (after a few classes back in college).

After a handful of yoga classes where I couldn’t relax and just wanted to go to the most challenging teachers, I slowly started to find peace and reduced anxiety through the stillness and relaxation. The meditative parts of the practice started to make me feel more energized, and I craved coming back to class. It was almost like a switch flipped and not only was the yoga helping me deal with my IT band pain (that has led to early arthritis in that knee), but also to help with my anxiety.

After healing from the injury, I still trained for races, but was finally able to practice more intuitive movement. I was able to exercise for shorter periods of time because it made me feel good, even if wasn’t high intensity, over an hour, and didn’t burn a bunch of calories or make me feel like I was an athlete. I started to try group fitness classes and did group weight training with other people. By the week exercise became more and more fun and I craved it for the enjoyment, mental clarity, and feelings of strength, with the added bonuses that it aided by health in a variety of ways.

Now, being a mom, I still would love to exercise most days of the week in as many ways as possible, but I just don’t have the time. Because of the joy movement brings me, though, I ensure I can fit it in. Some weeks, I can move my body intensely 4 times and others it might be once. No matter whether I’m moving and energized or still and a bit more relaxed, I know movement is always an option and tomorrow is another day to do something different.

As I go back to completing road races and a triathlon this year, I have a loose plan, but know it won’t always be possible to follow. Which is A-okay! I’m not a pro-athlete, and I’m doing it for the enjoyment and strength it brings me to compete at this level.

A Week of Activity: What Intuitive Movement Looks Like To Me