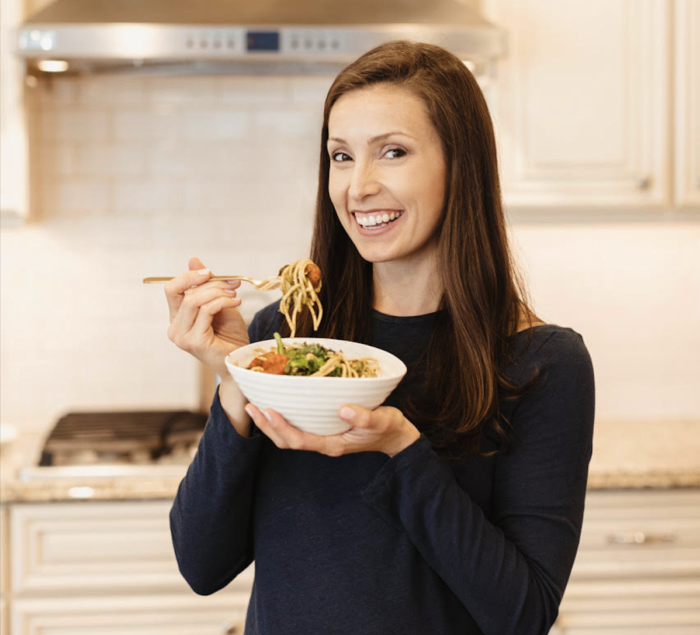 We’re about to dive into the intuitive eating principle that essentially gives all the critics the fuel to critique. There’s this idea that creating peace with food and granting yourself unconditional permission to eat what you want will result in constant binges on fried food, and eating cookies for breakfast everyday. Trust me though, this isn’t what your body actually wants! Make peace with food for performance, and you’ll see.

When it comes to the actual principles of intuitive eating, the third listed in the book is making peace with food. As already mentioned, you don’t need to work through the principles one by one, in order, or even refer to your habit changes as the principles themselves. After all, it’s supposed to feel instinctive after your body is in touch with what it needs and how it reacts to eating patterns anyway!

By making peace with food you’ll:

Calling foods good and bad, healthy and unhealthy, clean and dirty have become such a normal part of language in our society that we never stop to realize how ridiculous it is, or how harmful it can be.

Food doesn’t have a moral value, but by naming it as if it does, we instantly project the moral value we’ve put on foods onto our own decisions and self-worth. You know you’ve either said it or heard it before. “I was so bad this weekend, I ate pizza and cake on Sunday” or “Once the holidays are over I’ll be good.” Um, what? There is no reason to say you were “bad” for eating a food you enjoyed! And you aren’t any more “good” of a person on days you eat more vegetables than others.

When it comes to “clean” eating, I like to leave that term with food safety, and do my best to let athletes know the 5 second rule isn’t a real thing, especially on a pool deck or baseball clubhouse. This read by my colleague Marie Spano, aptly titled “Clean Eating Sucks” is another good article on that specific language.

Why is this language problematic? Even if you don’t truly feel the moral connection with your food and exercise choices, talking or joking about food in that way can be harmful to others. They can instantly feel judged for their food decisions or feel as if their body weight or state of physical health make them “bad”, less than, or unwelcome. And this is where the guilt and extreme cravings come in.

Make Peace With Food to Break The Guilt-Deprivation Cycle

Along with the “good” or “clean” food vs. “bad” food mentality, comes guilt or shame for most people. When you’re worried about every bite of food going into your mouth being “good” enough, you’re going to be thinking about food WAY too much, reducing the time and mental energy spent on things that really matter while increasing feelings of anxiety.

The constant thoughts about the “bad” foods you can’t have, but you actually really like, wind up increasing cravings as well. Of course you’ll be thinking about and craving cookies, bread, or a burger all day if you’re always feeling deprived from it. And of course once you allow yourself to have those foods you’ve been craving, you’re going to eat a dozen cookies, 5 dinner rolls, or the biggest, most greasy burger you can find and not feel well after. When I was working at the Newtown Athletic Club, I had more conversations about overeating to get rid of food than you could imagine. While it was especially true around the holidays, starting with Halloween, it would also get brought up a lot around summer parties and birthdays, too.

This topic often brings me back to one example from years ago, when I was talking to a client about her leftover Halloween candy. She described how every year the day after Halloween she just stands there when no one is home, polishing off the peanut butter cups so that they won’t be there again the next day. Despite actually really liking peanut butter cups, she inhaled them without enjoying them, felt guilty afterwards and then deprived herself of them until the next holiday. Sound familiar? Making peace with those peanut butter cups by Christmas meant that she looked forward to sitting down and slowly enjoying a couple and feeling satisfied. And not fearing a binge when there were more hanging around the couple of weeks after a holiday.

Once clients start having experiences like I described above, one by one with foods, they often slowly get to a point where they feel comfortable allowing themselves to eat whatever they want, whenever they want it. Other times though, which I’ve seen more often with injured athletes or our Fit Fueling participants, people go all in all at once. This can mean a full week or more of eating allll the things they weren’t allowing themselves to eat in larger quantities than you might expect.

But, no matter how slowly or quickly people allow themselves to make peace with food, when working with a dietitian and identifying eating patterns (foods, balance, timing) that work best for them, they eventually get to a point where their body is craving more nutrient dense foods the majority of the time.Previously forbidden foods wind up losing their luster when they’re no longer off limits. This doesn’t mean you’ll no longer like foods you used to though. It usually means you get to enjoy those foods more and feel more satisfied from less of them.

What Food Makes You Feel Good?

Along the way, the response of both your body and brain to food begins to become intuitive. You start to notice that when you include more fruits and veggies in your diet you feel more satisfied and energized from the nutrients and fiber. Or that you automatically include carbs in a post-workout snack, because you don’t want to feel ravenously hungry later and overeat. You may also notice that if you eat foods that cause you some GI distress just because they taste good, then the experience may not be something you engage in as often. I really do love the taste of frosting, but if I eat a cupcake on an empty stomach, I soon have gas, a headache, and become irritable. So, I’ve learned that if I want to enjoy a cupcake, I do it after a protein and veggie rich meal to balance out the sugar. And I am satisfied from much less of it in general since it isn’t an off limits food.

Sometimes I find that clients don’t even like food they thought they liked! My favorite example of this will always be with a woman who ate a lot of diet foods and very little carbs. She would come home from a couple of hours at the gym, eat some turkey, veggies and diet iced tea only to take down 5-10 tootsie rolls shortly after. I knew it was her body craving the sugar since she was deprived of carbs and maybe she chose that candy due to some nostalgia from childhood. Either way, after making some changes to her pre and post workout fueling, and then engaging in a mindful eating exercise with the tootsie rolls, she came back to her next appointment proclaiming how she doesn’t even like tootsie rolls! Be Guided by How Food Makes You Feel

Finding Balance Eating as an Athlete

More than the general population, it can be “easier” for athletes to get away with having a lot of “off-limit” foods. But, this idea of forbidden foods and allowance of cheat meals creates that deprivation mindset, which can in turn negatively impact the athlete. They become overly concerned with food, have increased cravings after workouts or on off days, and may overeat and then feel guilt (and have a bad workout). Other times, the idea of cheat meals makes them think it’s time to go all out with a meal, dessert and alcohol, which limits their recovery and in the long term, their performance.When I worked with the Phillies organization, I worked hard to flip the term “cheat meal” to “treat meal”. I also allowed them treat meals more than the previous one time per month, but did them in a much less extreme way. We had nutrition guidelines we created and followed to ensure the money the organization spent on food was being used for nutrient dense items that the guys might not have access to otherwise with the low minor league pay. But, if we were strict and they didn’t enjoy the food provided, that would lead to them ordering out anyway or going overboard after a game.What can be even more hard for athletes is to incorporate mindfulness into their eating. Athletes should incorporate mindful indulgences into their diets. They need to accept and recognize that food is more than fuel and there are other reasons we eat (social eating, taste, comfort). This mentality can help reduce stress, which we know can negatively impact recovery from training.What this could look like:

How to Make Peace with Food: Key Takeaways

With all this being said, we at KJN understand that making peace with food can be complicated and confusing. If you feel like you need extra support in this process, reach out to us to hear about our 1:1 coaching program. We teach you how to merge the principles of intuitive eating with sports nutrition to help you achieve long-term success with your nutrition, fitness, and relationship with food. If you’re a female wanting to explore intuitive eating with more guidance on your own to benefit performance, consider the Fit Fueling full course, or the sports nutrition mini course.

Check out the other posts!